It seems all but official that Sony will be revealing PlayStation All-Stars Battle Royale this week, and a lot has been written about the potential rosters. Characters from Sony’s past and present and even 3rd parties have been batted around. There has been one character, who was originally rumored, that hasn’t gotten as much press, and I think its partially because he isn’t known for video games.

While most gamers have fond memories of Goldeneye on the Nintendo 64, James Bond remains more of a theaterical and literary character. Not only that but most of his video game endeavors are more closely tied with Sony’s competitors, as Goldeneye for both the Nintendo 64 and the remake for Wii are seen more as Nintendo stuff (even though Goldeneye Reloaded was ported to both PlayStation 3 andÂ XboxÂ 360 late last year). So on paper, it really doesn’t make sense for James Bond to appear in the game. Hell, he would be taking up a valuable spot better served for any number of characters.

But I do think there is a lot of up-sides to including the world’s greatest spy. And it would be a terrific get for Sony and Superbot if they are able to include him in the game. 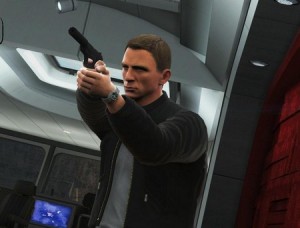 First, and perhaps most important, James Bond broadens the appeal of the game. This isn’t a knock on Sony or any company involved with these type of projects, but it tends to cater to fans of the franchises represented, which also means it has a ceiling of potential. Bond appeals to a base beyond gaming. His movies have existed for 50 years now and have been seen by millions. Not that this will exactly translate into sales, but it may get eyes on the product from folks who aren’t traditionally gamers or to be more specific Sony gamers.

Second, it opens up the avenue for Sony to create productÂ synergy. The next James Bond film, Skyfall, will beÂ distributed by Columbia Pictures, aÂ subsidiaryÂ of Sony Pictures. This allows Sony to use PlayStation All-Stars Battle Royale to advertise Skyfall and use Skyfall (most likely the Bond character) to advertise PlayStation All-Stars Battle Royale. If they REALLY wanted to push the envelope, they could even include the game in the background of one of the movie’s scenes.

Finally, Sony could use this to help bolster sales of Bond titles on the system. While Bond remains a fairly multi-plat franchise, it does seem like he performs worse on Sony platforms. This could give him more exposure on the console/fanbase, and really would be a big boom for Activision and Sony.

So when Sony finally pulls the curtain back on this long-rumored title, I hope the codename 007 isÂ rightÂ there alongside it. He will be a terrific “Get” for the infant franchise.