Some events in history can be traced back to one major catalyst for change. Things that have sent men and women to war. Has changed the way we’ve done business or even traveled.

Weaponized attempts to be a movie that tells of a future that our current path will lead us on, but does it succeed in making a clear-case?

A damaged homicide detective must prevent a grieving father from unleashing a “robotic virus” that he believes will destroy the terrorist cell that murdered his son, but at an unimaginable cost.

A Bit of the Future in the Present – For me, I felt the premise of the movie was rather unique. The idea of nanotech which allows people to “jump” into other bodies temporarily seems like something that sci-fi has always played around with, but using that tech in conjunction with a “Minority Report” style, let’s kill people before they can do some harm mentality could create some fascinating moral dilemmas. And the film plays around with that theme of morally gray areas to accomplish one’s goals, but then it throws the whole thing under the bus to get a nice and neat conclusion by the end of the movie. 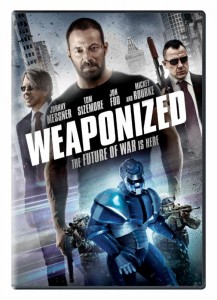 A Bit Too Clean – The first thing I noticed while watching the movie was just how clean and pristine the whole ordeal appeared. I wasn’t sure if it was a good or bad thing until about half-way through the movie when I realized the problem was that it lacked a real world feeling. There’s a scene when one of the main character walks into a building, and it’s him and the receptionist, and that’s when it dawned on me that this world lacked a feeling of being lived in since no one does. The roads are empty. Police departments are quiet. Warehouses are abundant.

One Note, No Higher, No Lower – Almost all of the characters in the movie is given a clear role and they are not to deviate from that role over the next 90 minutes. We have the gruff and stern Police Captain. We have the by-the-books partner. We have the over-worked, but loving wife. We have the evil mastermind who believes he is doing good at all cost. We have the somewhat stoner hacker Asian character, who also secretly knows a form of martial arts. The only person who is really given any type of depth, and not a ton, is the main character and that’s because he is able to play off the other roles around him.

Good Enough – The acting in this film is what I would consider passable. No one in the film does a poor job, but none of them do a good enough job to elevate any scene beyond workable. There are a few times when I think the movie is asking more of the actors than they are able to give and those scenes just fall really flat.

A Tale of Two Movies – The first half of the film plays like a type of detective story with Detective Walker and Detective Ross trying to solve a multiple homicide. We see them interviewing the suspect, witnesses, retracing the steps at the scene of the crime and then that disappears. And it becomes like these pseudo- well, I don’t know nor does the movie. It never knows what to do with itself in the back half even though it knows where it wants to go. So when we get the info dump to start the 3rd act a lot of stuff clicks, but made the middle portion drag a good deal.

Weapons Not Included – Expectations fall clearly on the viewer so I have myself to blame for this one, but with a name like “Weaponized” and the box-art, I expected more of an action movie. And while there are a few fights in the film, nothing really stands out as an extraordinary set-piece. I kept waiting for the movie to take it’s premise and really run with it, but nothing of the sort ever happens. Such a shame. 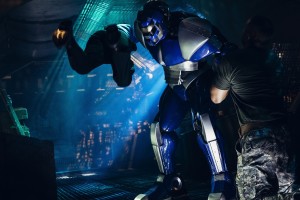 Man vs Machine – The film teases a lot throughout its runtime. Like noted before, the box-art promises a much more exciting movie… and the film finally attempts to deliver on that promise in the final 10 minutes and shocking to no one, it kind of falls flat. We have a team of heroes trying to combat these robot and well it’s nowhere near as exciting as I just described it. Though there’s one funny part when Detective Ross attempts to probe the robot, I guess you would say.

Movie 3 (Out of 7) – My expectations aside, there’s really nothing special in this movie. It’s the definition of passable, but also means really unremarkable.