While the spotlight tends to be placed on the higher profile movies of the DCUA, the LEGO DC Super Heroes brand has created its own distinct voice and continuity. Here we get the 3rd release (not including the introductory special) in the franchise, and we wonder does the seams begin to show?

The brilliant, hyper-obsessive-compulsive, super-computer Brainiac is combing the universe for new additions to his collection of worlds when he stumbles upon a ripe planet for his taking – Earth. But Brainiac quickly discovers Earth has a “firewall” – the Justice League. 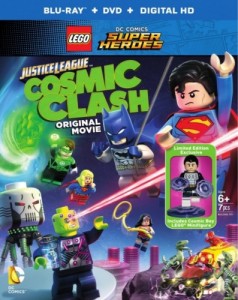 Hide N’ Seek – The animated feature starts with a game of Hide n’ Seek between the Leaguers in the Hall of Justice, and it does the best job of summing up why these movies are needed. We’re so accustom to the more “adult” take on the DC universe in the animated movies, television shows, movies and comics that we sometimes forget they can have goofy fun. It was also a nice way to reintroduce a lot of the members since we don’t spend a ton of time with them outside of Batman!

2. The Return of Bruce Wayne’s Friends – While the movie advertises itself as a Brainiac story, which it completely is, it’s also a time-travel tale. And it takes a bit of inspiration from Grant Morrison’s 2010 “The Return of Bruce Wayne” as we get to see Batman don the Bat-Caveman guise and the Bat-pirate outfit as he travels to time trying to rescue his friends. While we don’t spend a lot of time in any one time period, we do get a few fun gags and some time-shenanigans.

3. The Batman Beyond – One of Batman’s time travel stops actually takes him into the near future, and this is when the movie gets to spread its wings a bit. We get a Superman/Brainiac hybrid that is both terrifying and comical at the same time. And we get the appearance of the Legion of Superheroes (or at least members of the team). During this segment is when the heart of the movie really takes shape.

Something that has been noted before, one of Batman’s most inconsistent elements is being cast as a “loner” while having one of the biggest supporting cast in all of comics and being close friends with a lot of the Justice League. So part of having to break his friends free is admitting that he is friends with them. But more than that this film takes the trope of Batman always being prepared to destroy his friends (see JLA Tower of Babel or Justice League Doom or the OMAC Project) and kind of invert that. If Batman presumes they can be a force for evil, does he also believe they can be saved? It was a super clever moment and caught me by surprise.

4. LEGO Power Rangers – Won’t go into details, but the climax of this film played into all of my nerdy tendencies. And just a blast to watch unfold!

5. The LEGO League – Aside from the LEGO Movie, I always felt that enough properties don’t go far enough with the whole concept of being LEGOized in their design or world. That doesn’t really change with this movie. It has a few gags, but really if it had another style nothing would have been lost from the movie. I don’t know how to fix that, but still disappointed it happens.

6. The Voice Work – The LEGO movies have had a fairly consistent cast, and they all continue to do a bang up job with the material provided to them. The new addition to the cast Phil LaMarr (no stranger to the world of DC having played Green Lantern, Aquaman, Cyborg, Green Beetle and many more) is fun as Brainiac. It is a more comical Brainiac than we are use to. He kind of reminds me of Fi from The Legend of Zelda: Skyward Sword, but done more tongue-in-cheek.

Jessica DiCicco does well as Supergirl with the material given, but I felt it was an odd direction to take the character. She is given a cheerleader personality and breaks into cheer several times through the film. I didn’t get why, but the direction they went. Kari Wahlgren, Yuri Lowenthal and Andy Milder as the Legion of Superheroes all do serviceable jobs, but nothing stands out as super memorable from them. Everyone gets the job done.

7. Fun – I dropped this word several times throughout the review, but the big take away from LEGO Justice League Cosmic Clash is that it is fun. Very fun. It has a fun story with a fun villain. Some fun interactions with the various heroes. Fun action and setpieces. It’s just a joy to watch.

Review 6 (Out of 7) – The word is fun. And I really can’t imagine someone going through this movie and not having a good time. Only knocking it for some odd character choices, some set pieces are shorter than I would have liked and really the focus on Batman.