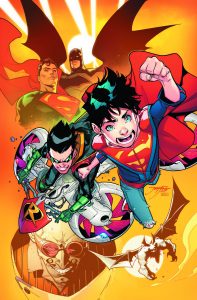 Batman and Superman have enjoyed a flexible relationship in comics over the decades. They have been cast as the best of friends, bitter foes and joint leaders. Thus, it isn’t too surprising to find that their offsprings share a similar, and solid, dynamic.

Super Sons begins like all great stories do with a bratty kid bossing around his parents and siblings. The story beat actually has little bearing on the first issue, but I’m sure will be important down the road.

The story’s format isn’t unusual for comics, but I do enjoy how it is layered. The opening sequence has nothing to do with the rest of the book, but it offers a tease for the future and in some ways deals with the heart of the series. It is called Super Sons, and much like Damian is his father’s child so is Jon, but what of a child who wields more power than their parents? That’s the collusion course the two leads seem fixed on.

The second layer of the comic is the introduction of Robin and Superboy (one’s older and one’s taller) in the midst of a mission gone array. By the end of the issue, the readers have no idea what the mission is but again another fun tease for the future. Also, it allows us to get into the action before the book slows down. 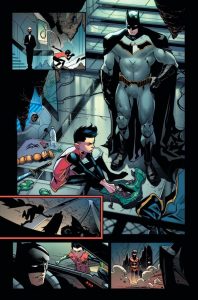 When I say slow down though, I don’t want it to be thought of as a negative. In this case, the best part of the book comes when we stop them from being Robin and Superboy and let them be Damian and Jon. For me, this book will live and die by how the creative team treats them as kids.

Based off the first issue, we’re off to a rocking start. When we’re first introduced to Jon, he is going through something we all know too well… waking up early to go to school. On the bus, we get to see that Jon is very much his father’s son. Reminding me of a sequence in Man of Steel, we see Jon have to fight back his baser instincts because of his enormous strength.

Luckily for Jon he and his friends get saved by an “angel” which Jon doesn’t buy and you get one of the issue’s best reveals and exposition dump. I won’t ruin the specific, but know that Damian is now on the scene. And going back to the point of kids being kids, I love one of the first things Jon asks is why isn’t Damian in school, which is a fair point since around the same age. He also questions his educational background and abilities beyond his age. 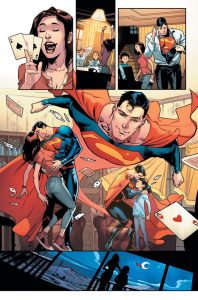 To me, this is the most important scene in the book and perhaps of these two pairing. It shows the major difference between Damian and Jon isn’t their parents or their powers, but their upbringing. Jon, while shielded from the world, was raised in a relatively normal environment and progression. Damian was expected to take on so much more responsibilities at a young age. I want to see how these two characters are able to help the other become whole with their friendship.

On that note, I have to give credit to Tomasi who has an amazing knack for really nailing the voices down for these younger characters. He of course has years of experience writing for Damian, but his Jon is just as natural and charming.

All of this is held together by the great art of Jimenez. What makes it most unique for me is that Robin and Superboy are two of the youngest characters in all of DC right now so they aren’t really built or well-defined. They aren’t muscular like their fathers and not tall or developed like some of the Titans/Teen Titans so visually it’s interesting to see the world around them. Batman appears bigger, the surprise at the end seems bigger and even their environments take on a different edge.

There’s a great panel near the end of the book with Superboy and Robin trying to navigate the skies and it somewhat recreates an iconic image from The Dark Knight Returns, but neither kid has the stature nor ability. It is dorky, and clumsy but oh so adorable.

Review 7 (Out of 7) – Not every book can nail it’s look, tone and characters in its first outing, but here we are. Super Sons is a delight to read and a worthy recommendation.