I love spy-entertainment. I’m not even sure if it is an actual sub-genre, but it would be my favorite. I’ve made no bones that James Bond is my favorite film-franchise. I love the Bourne films. I dug Chuck and Covert Affairs. Always hope for a turnaround on Agents of SHIELD, dug the premiere of Agent Carter, and one of the few people who absolutely loved Alpha Protocol. I tell you all of this to understand my fondness of the genre when entering Kingsman: The Secret Service. A movie I know isn’t on everyone’s radar, but was always on mine. After seeing the film, not once, but twice in theaters, I’m here to tell you why it should be on your radar too when it drops on Feb 13th. 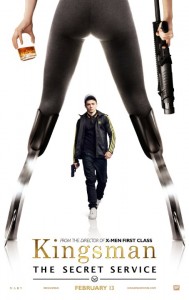 Kingsman: The Secret Service is an adaptation of Mark Millar’s comic series, The Secret Service, and will be honest and say I’ve not read the books so may color my impressions of the movie. But the story focuses on Gary “Eggsy” Unwin a man who loses his father at a young age and deals with the growing pressure of being a “Street youth.” His father was a member of a “secret” organization, Kingsman, that did their best to maintain peace in the world. He dies during a combat mission, and one of his fellow Kingsman, who felt it was his failure that caused the death decides to make a promise to his family.

Colin Firth’s Harry Hart grants his son, Eggsy, and his wife, one free promise. After using it to get himself out of jail, Eggsy is taken under the wing of Hart and trains to become the newest member of “Kingsman.” This is where the movie originally took me for a spin, I expected more of a spy thriller, but it becomes a sort of spy-training ground movie. Where Eggsy and a handful of other recruits are put through vigorous tests to prove their worth to the Kingsman organization. This includes various trials that involve thinking on your feet, teamwork, trust, loyalty and well combat-training. If you told me going into the movie that this focus on how one becomes a refined spy would be engaging and oddly not over the top, I probably wouldn’t have believed you, but it makes for some great character moments. I would say the one flaw of them is ultimately most of the characters introduced during this don’t matter by the end of the movie.

Actually, the whole Kingsman organization confuses me. The entire movie kind of hints at it being this larger organization with about half a dozen different active agents. But aside from the recruits, Harry Hart and Arthur, all the other agents are pretty MIA throughout the film. Which is even more bizarre after the events leading up to the climax of the film. Though only a minor flaw of the film. 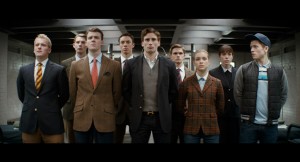 On the evil side, you have Samuel L. Jackson’s Richmond Valentine, who puts on one of the most exaggerated, but fun accents in a movie in some time. Valentine is a great villain in that he is just this goofy and over-the-top foil the entire time. His greatest quirk being someone who is averse to bloodshed but calls for it all the time. It features a great pay-off by the end of the film. I feel like his character would be worth seeing the movie for alone.

His grand scheme is also rather ingenious, and I like how the movie cloaks it in mystery. It isn’t really sinister, but it is at the same time. And to give it away would do the movie disservice. Let’s just say the best villains are always the ones who believe they are doing right by the world 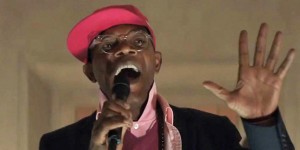 Much like any quality villain though, he is seconded by a gimmicked henchwoman right out of early Sean Connery Bond films. In this case, Sofia Boutella’s Gazelle, who legs have been replaced by some sharp blades. And they come out to play often in this film. It’s also great to watch her interact with Valentine, kind of comes off like a frustrated mother at times. Though there is clearly an underlying element of respect for his work.

The interactions between almost all the characters work well. Whether it’s Hart and Valentine’s subtle jabs at each other’s secret profession. Eggsy and Arthur and their difference in class-standing. Eggsy and his step-father and his gang of thugs. And the list goes on.

The character moments are great, but this is a spy-movie. We want to see great action and clever gadgets, and you get both of them in spades. Matthew Vaughn has such a way with comic book action. We’ve seen it before in Kick-Ass and X-Men: First Class, but he ups his game with this movie. The opening set-piece is as smooth as it is violent, and has the twisted sense of humor that will be seen throughout the film.

Much of the action throughout the first half of the film is smaller in scale, and tend to be more intimate fights or explosions. But as the movie begins to ramp up for the big climax, there’s a fight sequence that is just hyper in its filming and execution and is all the more lovely for it. I don’t want to give away the set-up or the pay-off, but it left me grinning and grimacing both times I’ve seen the film. It is early contender for action set-piece of the year.

The finale doesn’t go for the same type of action, but it does go really over the top. It’s like a fast-paced shooter in the best possible way. It also features one of the greatest display of explosions in a movie in quite some time. 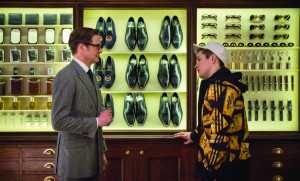 The gadgets while not as elaborate, and sometimes goofy and way too-on-the nose, as some featured in James Bond are the right mixture of cool and useful. They come into play just when they need to, and never seem like a deus ex machina for the characters. Not much else to say about them except you’ll probably want a freshly pressed suit of your own.

Review 7 (out of 7) – The movie is a joy to watch from its creative opening credits to its grand finale, and even grander finish for our hero. It harkens back to the early days of James Bond but still feels wholly original and modern. It is a must-see.