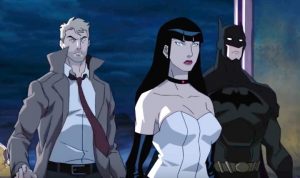 When the Justice League doesn’t know what’s going on, who ya gonna call? Not the Ghostbusters in this case, but the Justice League Dark. There is an epidemic of humans seeing demons in their friends and family members and killing them so Batman (Voiced by a stern Jason O’Mara) teams up with some magical buddies, including Zatanna (Camilla Luddington), Deadman (Trying too hard to be funny Nicholas Turturro.), and the star of the show John Constantine, who is voiced by the actor who played him on the 2014 NBC TV show, Matt Ryan. DC Comics’ supernatural superstars Swamp Thing and Etrigan pop up too and sound like the Cookie Monster and Uruk-Hai while looking cool in the action scenes and probably giving Alan Moore a heart attack.

For a movie that features arguably some of the coolest characters in the DC/occasionally Vertigo canon, Justice League Dark leans heavily on the disappointing side. Ostensibly, Ernie Altbacker and J.M. DeMatteis are telling a supernatural mystery plot, but a flashback midway through reveals the mastermind of all the possessions, killings, anthropomorphic tornadoes, and general freakiness. It’s Destiny (His medical license was revoked.), the villain from Sandman who slowly and mercilessly killed a diner in 24 hours in a horror tour de force from Neil Gaiman. In Justice League Dark, he’s much more shout-y and blast-y causing more collateral damage than what passed for Superman in Man of Steel. Altbacker and DeMatteis give him the backstory of the Arthurian/DC Comics villain Mordred as he is badly wounded by Etrigan and Merlin in some random medieval battle and swears vengeance. Mostly, he shoots energy bolts much like his almost pointless henchman Felix Faust, who exists to pad out the running, have a terrible mustache, and be an MRA in a waste of Canadian character actor Enrico Colantoni’s (Veronica Mars) talents. 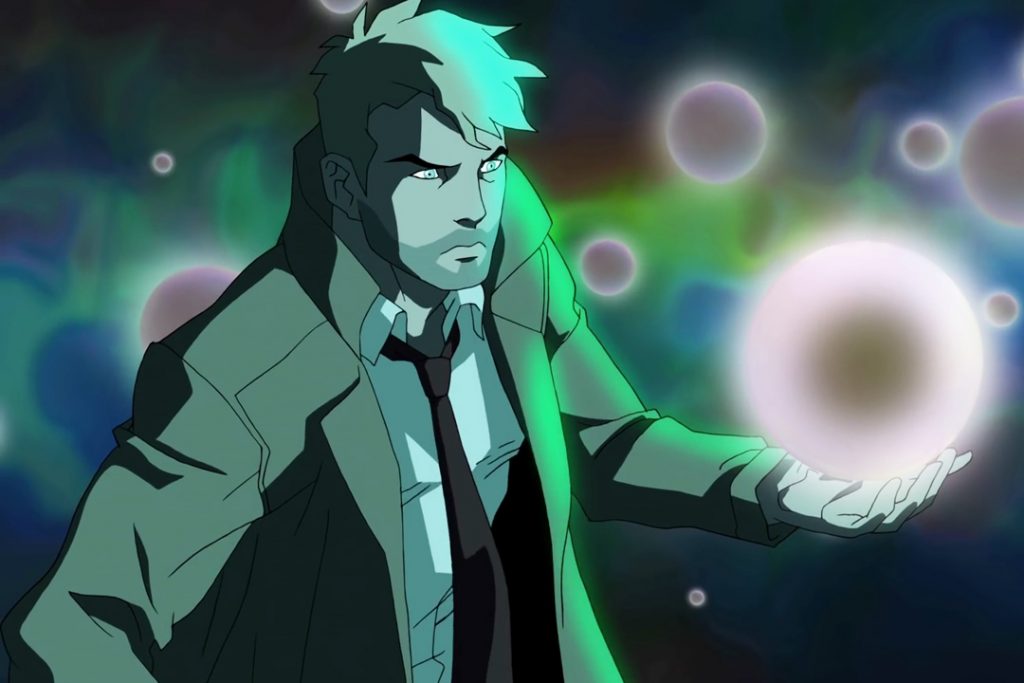 So, the bad guys suck. How do the “heroes” fare in Justice League Dark? Even though he sometimes goes into Harry Potter spell mode during the fight scenes, Matt Ryan is simply fantastic as John Constantine. His wit is well-timed as he lobs quips at everyone from cockney demons to Batman, and he has a strong chemistry with Zatanna. They trade barbs early on, but soften towards the end with Constantine helping Zatanna not go Dark Phoenix and help her work through her mistakes to take out Faust. It also becomes a running gag that random British cities are code names for their various booty calls. DeMatteis and Altbacker also resist the temptation to turn him into a straight up superhero, and his treatment of his friend Richie as well as his using of various characters, like Swamp Thing and Etrigan, to fulfill his ends are on par for his character with maybe a bigger special effects budget. But even he can’t resist a little superhero team-ups with Deadman and Batman, but those couple of scenes are flat out fun as Constantine learns that Batman’s utility belt isn’t to be underestimated.

To add to its many non-Constantine sins, Justice League Dark has issues with its female character. Zatanna comes off okay as the most competent magic user of the team even if she did kind of sell out to become a stage magician. She is friendly with Batman, is always cutting Constantine down a few pegs, and takes active part in the battles even besting a magically possessed Superman and Wonder Woman in combat. Except for the final one where Altbacker and DeMatteis jump into the cliché well and have her lose control of her powers so Constantine can come off as a nice guy and help her.

But, much worse than Zatanna is Black Orchid, who bears almost zero resemblance to the Bronze Age era shapeshifting detective, the Neil Gaiman and Dave McKean creation, or even the secret New 52 character. In Justice League Dark, she is the embodiment of the House of Mystery, which makes her basically John Constantine’s house slave. (I don’t see her getting paid anywhere.) Her lack of agency allows her to be manipulated by Richie when he summons Destiny. And to add insult upon injury, Jay Oliva usually frames her but instead of her face like she is just an exposition/character trait

And to go with its plot, villain, female character, and voice actor problems, Justice League Dark is filled with questionable creative choices that turn it from a subpar action/fantasy/superhero cartoon to a film worthy of roasting and/or drinking games. This is a film where a large chunk of time is dedicated to Batman fighting a poop demon in a hospital with an EKG that concludes with Deadman stating the very obvious that “Shit hit the fan.” And did I mention the fact that it’s impossible to take Swamp Thing seriously because he sounds like Cookie Monster popping up in a hentai with his tendrils everywhere.

Matt Ryan’s performance as John Constantine is the only redeeming factor of the garbage fire that is Justice League Dark. The movie has some cool characters, and Jay Oliva makes a genuine effort to switch up the magic styles in the battles even though he falls back on Harry Potter and possibly Doctor Strange one too many times. However, once the Dogma homage, it’s impossible to enjoy it as anything more than a “so bad, it’s good” kind of film.