Movie Review: Jingle All The Way 2

Jingle All the Way was a fun Christmas movie that has its following, but never the love and adoration of some of its peers. Twas  surprising to hear that a sequel was in the works. Even more surprising when you realize that the original film was released 18 years ago, and would feature none of the cast or characters from the original.

Instead, what we get is a slightly updated version of the tale starring Larry the Cable Guy, Brian Stepanek, Santino Marella, and Kennedi Clements. Much like the original, the sequel sees a dad trying to track down the hottest toy of the year for his kid during the crazy Christmas season, and getting into all types of hijinks along the way. Unlike the first though, I felt that the Harrison Bear wasn’t as hot as the Turbo Man figure, and the movie as much as it tries never really sells its scarcity.

While that is more of a pet peeve, the biggest difference between the two films is the antagonist of the films. In the first, Sinbad played a competing dad trying to find the same toy on Christmas Eve. In this one, the competition is officially/unofficially between a father and step-father. To impress his new step-daughter, the wealthy Victor hires his assistant to buy all the Harrison Bears so that Larry is unable to give it to his daughter for Christmas. To make himself appear the hero of the day! 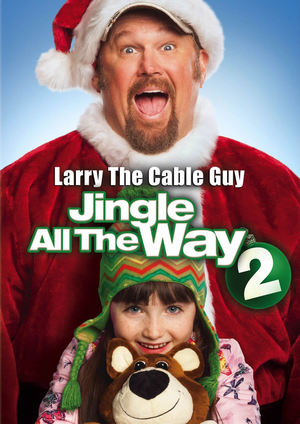 This element of the film doesn’t work for me for several reasons. First and foremost, the hunt is spread out over multiple days this time. This is harder to buy than a mad-dash search on Christmas Eve. We live in an advanced time when ordering online could have gotten it to them on time, they try to make a point of it by saying eBay would get it to them the day after, but not Amazon or anywhere else? Then there’s the fact that a single person is not only able to gather all of the inventory of a single store, but that he is able to do it to EVERY store in town before anyone else? Which also plays to contradiction to a scene in the latter half of the movie where it shows people actually lining up for the Harrison Bear. Are we to assume that they only tried that once?

It also stretched the bounds of belief that the man who was trying to prevent Larry from obtaining the bear, 1)Was not only able to go to every store to clean out their inventory, but 2)keep track of any and all sightings of the bear in every place in a 30 mile radius, and 3)know exactly which one Larry would go after so that he would have a plan to obtain his prize.

I will admit that some of this comes off as nitpicking, but the entire premise of the movie hinges on Larry’s quest for this bear, and it really does seem like they couldn’t justify some of the scenes and reactions that they wanted.

Where this film did work for me though was the portrayal of a happily divorced family. I realize saying happily divorced seems like an odd statement, but more often than not, divorce is played as a point of contention between all parties involved. But not in this film. Larry and his ex-wife seem friendly around each other. They seem to have a system in place that benefits their daughter. They don’t fight and bicker over any petty things, and seem genuinely happy for each other. It seems like a couple who really were in love with each other, and still like the other person but realized that they wanted different things out of life and decided to split. It was refreshing, especially during a Christmas movie, to see that not all divorces are nasty, ugly affairs.

Also liked that the divorce had nothing to do with their daughter. Larry is shown to be a completely competent and loving father, who does his best for his daughter. The mother embraces and even celebrates the things they do together, and never once is their love for her called into question or used as an attack or plot point.

Finally, the strangest part of the movie for me was Santino Marella. Not because he did anything wrong–he actually isn’t even in this movie a ton–but was just weird hearing him speak with an American accent after so many years of his exaggerated “Wrestlers accent” and never quite got use to it.

Review: 3 (out of 7) – An inoffensive Christmas movie that may stretch your suspension of disbelief, but has its heart in the right place. Really would recommend for a positive portrayal of a divorced couple, and how they can still co-exist.

Also if interested, we did a drinking game for this movie. If you need some liquid courage.