As part of the Spooky season, I have made it my agenda to check out slashers both new and old. With the genre spanning multiple decades, but reaching its heights in the 80s, it means that many new directors grew up with the genre as something special in their lifetime. And we are beginning to see the seeds of that love bare fruit as we have had a sort of slasher renaissance, but only under the table.

Now the 3 slashers we’re going to take a look at today don’t necessarily follow the rules, but instead attempts to deconstruct them in a new and meaningful way.

“Behind the Mask: The Rise of Leslie Vernon” is a comedy/slasher/mockumentary that looks behind the scenes as a man attempts to become a serial killer of legend much like Michael, Freddy and Jason. Like the post-Scream era, there is a bit of meta-commentary and wink wink to the movie, but when it earnestly tries to portray a man becoming a horror movie serial killer, it is clever and smart. And even the film’s final twists will shock you as it takes you for a ride you know you were on, but didn’t know you got on.

It is a bit morbid, but also so fascinating watching the killer plot out his every move and game the system to be in his advantage. It fills in the plot holes or logical jumps that exist in the slasher genre by making it all a product of the killer’s meticulous planning and manipulation.

“Last Girl Standing” is a horror/thriller that looks at the final girl AFTER the credits roll in a slasher. What type of trauma does it cause when you see your friends and loved ones brutally murdered and you have to take a life to save your own. And sadly, the film’s ultimate message that the horror never truly leaves you is a downer for the final girl, but makes for an interesting conclusion. 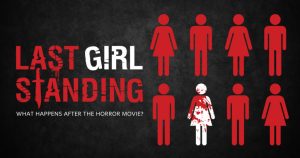 The movie begins at the ending with the final act of some unknown slasher film before jumping 4 years. And I think it’s that jump that proves vital because we have seen final girls return in sequels and stuff, but it’s usually fairly recent after their previous encounters and then they may have multiple encounters before vanishing or being killed off. But seeing someone who had to live with the nightmare and has had time to re-adjust to a somewhat normal life makes the difference. In the job she takes, the people she chooses to engage with and what she will do to protect her friends.

“Ruin Me” and “The Funhouse Massacre” in an era of filmmakers who grew up on slasher films, it would only be fair that characters have grown up on them as well. And what if these characters wanted to “experience” the horror of the slasher/killer genre without any of the deaths, but that may not be completely accurate. Both “Ruin Me” and “The Funhouse Massacre” pits their characters into a scenario in which they know all the killing is supposed to be fake, but we wouldn’t have a movie if that was the case. 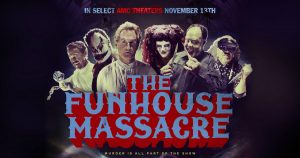 These movies make everyone Randy from “Scream” except they don’t actually know they have entered a horror movie just a facsimile of one. Both have turning points when the characters begin to realize that something may be awry, and I do think lose a bit of their luster when everyone isn’t in on the joke anymore, but still interesting to watch unfold.

These 3 (technically 4) movies form a modern day slasher trilogy that looks at the pieces individually that made these movies such hits back in the day. They are smart, they are creepy and they will satisfy your bloodlust without being too gorey.