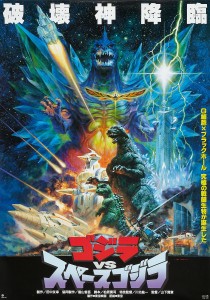 As the penultimate entry in the generally excellent Heisei series of Godzilla films, 1994’s Godzilla vs. SpaceGodzilla was met with lofty expectations. Although it is the sixth film of the Heisei era, it is only the second to feature a brand new kaiju with the crystal-powered SpaceGodzilla. The Heisei-era Godzilla films are defined by their ambitious, often audacious ideas (sometimes to the films’ detriment), and so it is hard not to be a little disappointed by the risk-averse nature of Godzilla vs. SpaceGodzilla.

Set shortly after the events of Godzilla vs. MechaGodzilla 2, the story once again focuses on the anti-Godzilla organization known as G-Force and the increasingly prominent psychic character, Miki Saegusa. G-Force has kind of learned its lesson after the last film, and is now looking into alternate methods of containing the Godzilla threat with Miki’s assistance, rather than putting all its effort into killing the creature outright. Complicating matters is the matter of the infant Godzillasaurus (now much bigger and referred to as “Little Godzilla”), who poses no threat to humanity but has essentially been adopted by Godzilla.

G-Force salvages the remains of MechaGodzilla to create M.O.G.U.E.R.A. (Mobile Operation Godzilla Universal Expert Robot Aero-type), a robotic weapon with the ability to split into two vehicles: a tank with drilling capabilities and a flying warship. Although M.O.G.U.E.R.A. was built primarily as an anti-Godzilla weapon, it is sent into space to investigate a disturbance that turns out to be SpaceGodzilla — a powerful creature whose genes are identical to Godzilla’s. M.O.G.U.E.R.A. is unable to deflect the cosmic menace, who heads to Earth with the goal of killing Godzilla and ruling the planet. I’d like to point out that the normally fearsome SpaceGodzilla resembles a sci-fi hedgehog when flying about covered in crystals. 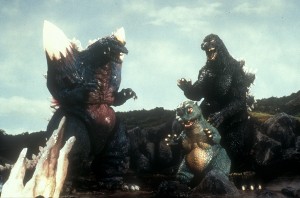 For most of the film’s middle portion, it does little more than cruelly tease the audience with ambitious possibilities. Mothra — still on an intergalactic mission to save the planet from a stray meteor — appears for a brief moment, but only to assist by dispersing dozens of tiny “Fairy Mothras” that relay a warning to Earth. We spend some time with Miki and the members of G-Force as they debate how best to handle the threat of Godzilla, but the plot quickly shifts focus back to the monsters. SpaceGodzilla traps Little Godzilla in a prison of massive crystals and lures Godzilla to his makeshift lair in Japan where he can thrive off the energy of Fukuoka Tower, now surrounded by the monster’s energy-emitting crystals.

The battle between Godzilla and SpaceGodzilla is lengthy, with plenty of explosions and impressive visual effects, but it has a very “been there, done that” feel. M.O.G.U.E.R.A. shows up to assist Godzilla, but it’s difficult to shake its resemblance to the much cooler MechaGodzilla. Seriously, how awesome would it have been to see Godzilla team up with his longtime foe for the sake of saving Little Godzilla? Alas, we only get lame drill-nosed M.O.G.U.E.R.A. (I’m really sick of typing that out) instead. After destroying SpaceGodzilla’s crystal energy source, Godzilla finally decides to use his super-duper “spiral” energy blast to put down his adversary once and for all. 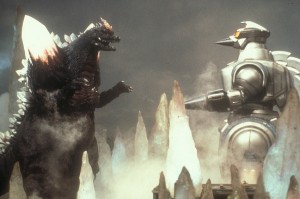 Godzilla vs. SpaceGodzilla is one of the more difficult films in the series to review. There’s nothing particularly wrong with it, but it is disappointingly content with playing it safe and does little to push the series forward. The human-related subplots are refreshingly scaled down this time around, but an ill-conceived romance between Miki and one of the members of G-Force feels crowbarred in. The musical score, composed by Takayuki Hattori and Isao Shigetoh, doesn’t pack the same punch that series veteran Akira Ifukube’s music does, but the main theme is memorable and suitably epic.

Fittingly enough, SpaceGodzilla’s design is emblematic of the film’s overall quality: he’s intimidating and fierce, but is ultimately just a meaner-looking Godzilla covered in crystals. The film’s production values are impressive and there is plenty of monster action, but it all just feels somewhat uninspired. Thankfully, Toho didn’t drag the series out when they were clearly out of ideas, and made plans for the next film to be the final entry in the Heisei series.

Fun Fact: The idea of SpaceGodzilla was conceived in the 1970’s, and the monster was to be used in a scrapped follow-up to Terror of MechaGodzilla

Memorable Moment: SpaceGodzilla impaling M.O.G.U.E.R.A. with his spiked tail and tossing it aside like a ragdoll