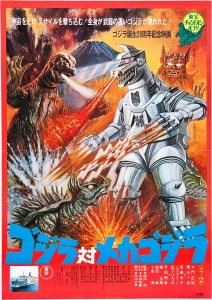 The Godzilla films of the 70’s might have consisted of some ironically entertaining films, but it was clear midway through the decade that the series had lost its way. Godzilla was becoming something of a joke to the world, and sharply diminishing ticket sales were reason for legitimate concern. With their backs against the wall, the producers at Toho went with their A-game in an attempt to restore legitimacy to the series. 1974’sÂ Godzilla vs. MechaGodzillaÂ represents aÂ trueÂ return to form, abandoning the focus on child protagonists and introducing one of Godzilla’s most dangerous and enduring opponents.

The story is an interesting mixture of folklore and interstellar threat. While spelunking caverns in Okinawa, a man named Keisuke finds a statue of a guardian deity named King Caesar lying next to a mural that describes an ancient prophecy. The prophecy warns that when a black mountain appears above the clouds, a fearsome monster will appear to wreak havoc. However, the second half of the prophecy predicts that two heroic monsters will appear following a lunar eclipse to drive off the evil monster and save the world.

You can probably guess that the evil monster in the prophecy is the titular MechaGodzilla — a formidable metal doppelganger of Godzilla created by the ape-like aliens from “the third planet of the black hole.” The aliens have disguised themselves as humans in an attempt to retrieve the King Caesar relic and prevent the second part of the prophecy from coming to pass. Keisuke receives assistance from a local archaeologist and his daughter, as well as from two Interpol agents who have been on the aliens’ trail.

The film’s monster cast gets plenty of screen time as well. Early on, fan favorite Anguirus (don’t ask me why fans like him; he only seems to be around to be a punching bag for the bad guys) has a brutal fight against MechaGodzilla, who is rampaging through Japan disguised as Godzilla. After having his jaw violently broken King Kong-style, Anguirus is forced to retreat, but not before buyingÂ justÂ enough time for the real Godzilla to show up. The brief battle ends in a draw when Godzilla’s atomic breath collides with MechaGodzilla’s laser eyebeam, causing an enormous explosion that seriously injures both combatants. 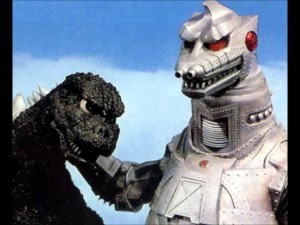 The middle section of the film focuses mostly on the human cast as they scuttle about Japan looking for a way to defeat the aliens and MechaGodzilla. Plenty of chase sequences ensue, as well as a few shootouts with the aliens, which is when things get slightly gruesome. There are some graphic arterial sprays when the aliens are shot, and the injuries make them revert to their true ape-like form. The effects aren’t as laughably bad as most from this era, but the aliens look as if they’re wearing left-over costumes fromÂ Planet of the Apes.

While recovering from his injuries on Monster Island, Godzilla takes advantage of an intense storm and absorbs the lightning, causing him to grow more powerful. As he swims back to Japan to confront his robotic adversary one final time, the humans use the King Caesar statue to reawaken the slumbering deity. In a scene reminiscent of the Infant Island natives’ pleas to their own guardian monster inÂ Mothra vs. Godzilla, an Okinawan priestess summons King Caesar (who looks like a rabid wookie) by serenading him with a kitschy pop song.

The battle between Godzilla, King Caesar, and MechaGodzilla is one of the finest in kaiju cinema history. The three monsters utilize drastically different fighting styles, with King Caesar excelling in mobility, MechaGodzilla preferring projectile weaponry, and Godzilla emphasizing a pugilistic up-close brawling style. The two-on-one battle might seem a bit unfair, but MechaGodzilla’s deadly arsenal of laser beams and a seemingly unlimited supply of finger, toe, and evenÂ knee-rockets give him the advantage through most of the fight. Eventually, Godzilla is able to harness the electricity he absorbed on Monster Island to create a magnetic field, which he uses to pull MechaGodzilla toward him and twist his head clean off. 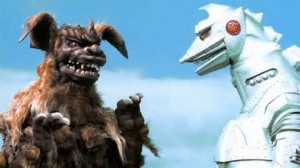 Despite the overcomplicated plot,Â Godzilla vs. MechaGodzillaÂ is one of the most enjoyable Godzilla films, and quite easily director Jun Fukuda’s finest work. It harkens back to the series’ finer moments while providing some inspired special effects and fight sequences. The large-scale fights are somewhat gory, but the bloodshed really helps to remind viewers of the animalistic nature of kaiju. Newcomer King Caesar might not be the most imposing-looking kaiju in Toho’s roster, but he is the most versatile and agile, incorporating some mild martial arts into his repertoire of moves. His alliance with Godzilla makes up for its brevity with sheer brutality, as the monsters fight with reckless abandon against MechaGodzilla’s deadly artillery weapons.

The film is certainly not without its share of problems. For one thing, there are far too many human characters to keep track of, to the point where I’m not even sure who the main protagonist is at almost any given point. Everyone seems to have a brother, father, or partner who wants to come along for the ride, and frankly, I would often forget who is who. The rest of the flaws, consisting of plot contrivances and some inconsistent pacing, are easily overlooked when you consider how far superior this film is compared to the rest of the 70’s Godzilla films. Jun Fukuda might not have ever been able to reach the heights of famed series director Ishiro Honda’s best work in the genre, but his swan song is a fan favorite that has held up very well over the years.

Fun Fact:Â In the Japanese version of the film, King Caesar is named King Shisa — a reference to the mythical lion-dog of Okinawan mythologyÂ

Memorable Moment:Â Â A surrounded MechaGodzilla turning his head 180 degrees to fight Godzilla and King Caesar simultaneously with his lasers and rockets