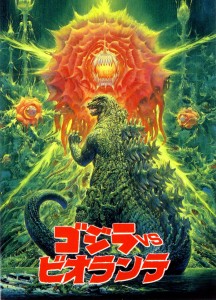 My biggest gripe with The Return of Godzilla, the 1984 series reboot that is considered first in the Heisei era of Godzilla films, is that Godzilla doesn’t have a rival monster to fight. In 1989’s Godzilla vs. Biollante, he is opposed by one of Toho’s most well-designed kaiju ever, and despite a few notable flaws, the film is easily one of the most inspired in the entire series.

Twenty minutes or so into the film, you might be wondering just what the hell you are watching. Scientists spout pseudoscientific facts at a rapid-fire pace, groups of men battle each other with guns and explosives, and every other actor is screaming awkwardly in English (yes, even in the Japanese version). Oh yeah, and psychics are involved for some reason as well. It’s clear that the writer/director wanted to throw as much as possible into this film, and after taking it all in, there is no doubt that this is the real reboot of the series that fans were clamoring for.

Nothing short of a novel could possibly do the ambitious story justice, but I’ll do my best to be concise. A scientist named Dr. Shiragami, who is experimenting with Godzilla’s cells in order to create more resilient plant life, is distraught over the loss of his daughter Erika, who was killed in a terrorist bombing. Heartbroken and desperate to keep his daughter’s memory alive, Shiragami splices Erika’s DNA into a rose plant that he had previously infused with Godzilla’s cells, creating a hybrid creature referred to as Biollante.

Before you can say “Little Shop of Horrors,” Biollante grows to enormous size and sprouts lethal thorny vines and tendrils with acid-spewing jaws at the ends. Despite its horrific appearance, the creature maintains some aspect of Erika’s humanity, and even defends Shiragami’s lab from thieves working for an American group called Bio-Major (the terrorist organization responsible the bombing that killed Erika), who want the Godzilla cells for use in their own experiments. After dispatching the thieves, Biollante escapes to a nearby lake where she continues to grow, eventually blooming into a monstrous rose. 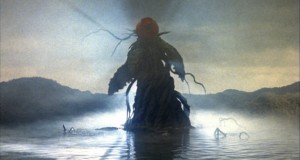 Frustrated by its own failures, Bio-Major has bombs planted inside Mt Mihara (the volcano that Godzilla was trapped within at the end of The Return of Godzilla), and demands Shiragami’s work as ransom. When plans to deliver the ransom fall through, the bombs go off and an understandably pissed off Godzilla is released. Although he senses Biollante, he can’t fight her just yet. First, he has to fend off the Super-X2 — a revamped version of the vehicular weapon used to fight Godzilla in the previous film. The Super-X2 improves upon the previous model by adding diamond shields that are designed specifically to deflect Godzilla’s atomic breath. Much to the Japan Self Defense Force’s dismay, however, the shields are unable to withstand Godzilla’s continuous assault of bad breath, and the Super-X2 is forced to retreat.

With the pesky humans temporarily out of the way, Godzilla finally confronts his floral counterpart. Biollante’s massive size severely limits her mobility, but she uses countless thorny vines to subdue Godzilla. Even while restrained, Godzilla is able to use his atomic breath to defeat Biollante, who dissolves into spores that float into space. The Super-X2 returns for a last-ditch attempt to defeat Godzilla, but is destroyed after its shields deteriorate. The humans take advantage of Godzilla’s weariness from battle and inject him with anti-nuclear bacteria created by Dr. Shiragami, but it does not have any effect on him due to his extremely low body temperature.

With no remaining defenses, the humans nearly give up hope when they notice Biollante’s spores scattering through the atmosphere. Shortly afterwards, a larger and more powerful version of Biollante emerges from the ground and launches a final, desperate attack against Godzilla. Biollante is defeated once again by Godzilla’s atomic breath, but the battle generates enough heat to cause the anti-nuclear bacteria within Godzilla to start to literally eat away at him. A weakened and slowly dying Godzilla retreats into the ocean as the humans celebrate their victory.

Considering the film’s running time of an hour and 45 minutes, the complexity of the story is quite impressive. Genetic experimentation, psychic phenomena, terrorism, and environmentalism are just some of the many themes present, and while its scattershot approach feels a bit overwhelming at times, the film is surprisingly successful at juggling so many plot threads. For a film that is ultimately about a radioactive reptile fighting an overgrown rose bush, it could be much worse in terms of story.

The film’s most glaring flaw is its wildly inappropriate music score, which feels like it would be more fitting in one of Jackie Chan’s Police Story films of the 80’s. The overbearing music occasionally makes way for updated versions of classic Godzilla themes, but that only makes it that much more jarring when the two styles of music are juxtaposed. Further auditory atrocities are committed as well. Virtually every non-Japanese character (and there are a lot of them in this one) speaks in English, but it’s evident that most of the actors aren’t at all comfortable with the language. The Blu-ray disc I watched strangely did not include the option to add subtitles for the English-speaking characters, and I had difficulty understanding most of their dialogue. 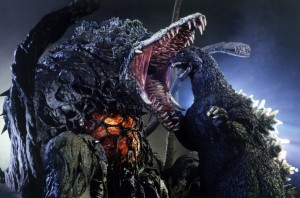 I can’t stress enough how impressive a kaiju Biollante is. In particular, her final form, which dwarfs Godzilla in size, is one of the most imposing monster designs ever put to film. The stationary nature of Godzilla’s adversary does not allow much flexibility for the fight sequences, but Kazuki Ohmori’s solid direction makes the battles a joy to watch regardless. Sadly, this film did not meet Toho’s expectations at the Japanese box office, and producers decided to use more familiar monsters as rivals for future Godzilla films rather than unique and ambitious monsters like Biollante.

Godzilla vs. Biollante is one of the easiest Godzilla films for me to recommend. The plot is just goofy enough to be laughed at by those looking for a fun B-movie to watch on a weekend night, and the action sequences are spirited and well-executed. You’ll have to follow the plot a little more carefully than you would your typical Godzilla story, but the film is thoroughly entertaining from start to finish.

Fun Fact: The first draft of the screenplay was the winning entry in a Toho-sponsored contest to create a new Godzilla story

Memorable Moment: Godzilla letting loose with his atomic breath while his head is gripped by Biollante’s massive crocodile-like jaws