Surprises aren’t always welcomed things. At the same time, when a surprise delivers it can be one of the best feelings in the world. Near the end of last year, Nintendo “surprised” us all with the release of NES Remix the day it was announced and turned out to be a fantastic little game. Now DC is up to bat with the “Stealth release” of JLA Adventures Trapped in Time, announced just about a week ago and in stores today (Tuesday, Jan 21st for those keeping count!). If “stealth releases” are going to be in the bane of NES Remix and now JLA Adventures Trapped, then I want surprises all the time! 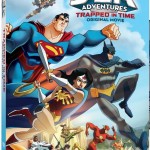 JLA Adventures: Trapped in Time isn’t set in the traditional DC Original Animated Movies (for whatever that means), instead featuring a new creative team including the director of Green Lantern: The Animated Series, Giancarlo Volpe, as producer and director of this film. He brings with him a slightly different tone and feel than your typical DC film. I couldn’t quite put my finger on it, it wasn’t as serious as stuff like The Flashpoint Paradox or Crisis on Two Earths, but it isn’t as humorous/tongue-in-cheek as Batman: The Brave and The Bold, it falls somewhere in-between those two and it was refreshingly different.

The movie itself, as the name would imply, includes the Justice League of America (in this movie Superman, Batman, Wonder Woman, Cyborg, Aquaman, The Flash and Robin) taking on the Legion of Doom (Led by Lex Luthor and 5 other villains), for a battle for the world. Once that goes south, time-travelling gets involved and really don’t want to spoil the story too much because it takes a lot of fun twists and turns including one amazing sequence in Kansas which I’ll touch on more in the second!

Speaking of Kansas, this film has some great action sequences sprinkled throughout. Starting out with an adventurous fight in the depths of space (hey logic be damned!), that is both fun and a visual treat. Somehow the film is able to top that with a more grounded climax at the end, but the real highlight for me is the aforementioned action sequence in Kansas. I won’t spoil too much because I just love it so much. But it is nicely animated and scripted. Some great lines and a funny ending involving a very weird baby. Trust me, if nothing else watch the film for this scene! 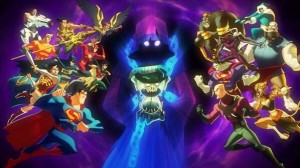 A film with quality action scenes will usually get a thumbs up from me, but this is matched by a really solid voice cast. The best way to describe the voices in this film is the idealist version of these characters. Its like them boiled down to their bare essentials. Superman voiced by Peter Jessop is earnest and noble sounding, Diedrich Bader reprises his role as Batman and brings that sense of justice that he had on the Brave and the Bold, and Wonder Woman is voiced by Grey DeLisle who brings a certain sense of innocence to her warrior fighting spirit. The real standout though are Jack De Sena, Dante Basco (Avatar: The Last Airbender’s Sokka and Zuko) and Laura Bailey who play Robin, Karate Kid and Dawnstar in this film. Robin mostly because he is a fun, sarcastic brat in this film. Karate Kid channels Zuko’s whiny, but noble acting from Avatar, and Laura really shines as the heart of this film. Stellar job all around.

Review: 7 (out of 7): From top to bottom, JLA Adventures Trapped in Time is a great film. It is fun, well-acted, some great action sequences and fantastic animation (and art design, which haven’t mentioned before), it earns my highest recommendation. It’s only 13 bucks and really worth it!

P.S: For some reason, this release is DVD-only. I would love to have a blu-ray of this!