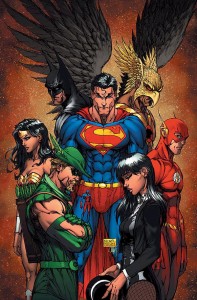 This review does contain “spoilers,” but since it’s been out for 10 years, I’m not all that worried about spoiling things for people. Needless to say, you’ve been warned.

It’s hard for me to believe that it has been 10 years since Identity Crisis came out. I had only been reading Comics for a few years at that point and it was one of my first BIG DC events. And I remember when it first came out people either loved it or hated it and I was one of them that loved it. The DC Universe had a completely different landscape back then.

If there is one thing DC comics are known for, it is their crises. To me this specific crisis was very unique because it was not on a big scale like Crisis on Infinite Earth’s or Infinite Crisis. It was much more personal and that is what I loved about it. One of the things that initially drew me to this series was the fantastic covers by Michael Turner. I just love the way he accentuates the heroes’ bodies and makes them look like gods, which is ironic because this series shows how human our heroes really are.

How does it stand up 10 years later? Continuity-wise: it never happened because DC relaunched the whole line with their New 52 initiative. There are a lot of characters that are in this story that either haven’t appeared in the New 52 universe or haven’t been portrayed as well as they once were. But I will discuss that more after I do an issue by issue retrospective.

Let’s start with issue #1: The issue starts off with Elongated 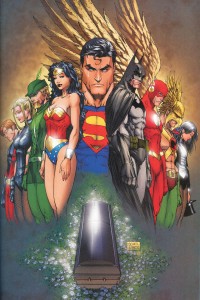 Man and Firehawk watching a mysterious box (which we find out contains one of Lex Luthor’s armors). This issue sets up a lot with Ralph/Sue and Tim/Jack Drake. Ten years later, I forgot about the pregnancy test. Needless to say, my heart sank at this point and just felt for Ralph. There are a lot of characters that appear in this series and it has been some time since I have seen the versions that appear in this series (Ted Kord), so that is always a nice treat. It’s nice for some of the less popular characters to get some of the spotlight. One thing I have missed is Oracle, I think DC did Babs a great disservice by having her recover from her gunshot wound from the Joker which left her in a wheelchair leading to her Oracle persona. The heroes are very organized and unified, and that is not something I have seen very much in the New 52, especially when you have two Justice Leagues fighting each other. The funeral is extremely sad no matter who you are. This issue had me very nostalgic for the relationships (Ollie and Canary, Clark and Lois, Barry and Iris) and the sense of legacy (Wally West, Alan Scott, Jay Garrick, and Bart Allen) in the Pre-New 52 Universe. This issue leaves off with the tease that there is a secret among the league. 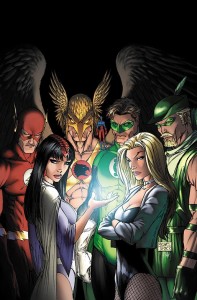 Issue two contains two of the biggest reveals of the series: why did the League suspect Dr. Light as the one behind Sue Dibny’s murder and what did the league do to him? I love the chemistry of the league in this issue; it is much more interesting to me as a reader when it is not oversaturated with Superman, Batman, and Wonder Woman. I love the use of smaller characters/villains in this issue. These issues really made me miss both the older Ollie, as well as Wally. They don’t write characters like this anymore. There is a lot of emotion in this issue, the characters are in a tough spot and have to protect their own. This issue also reminded me how much I miss some of the classic looks such as Deathstroke, Green Arrow, Hawkman, Flash, and Deadshot. Also to my knowledge, Elongated Man has not appeared yet in the New 52, I don’t know if he was left dead or not. 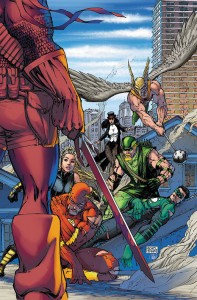 I love the characterization done in issue three. Everyone is written wonderfully. This issue contains one of the best fight scenes: Deathstroke the Terminator versus the Justice League. And it is narrated by Ollie and he makes sense of everything for the reader. I miss this older Oliver, his perspective on life is so much different that the current Oliver Queen. Doctor Light remembers what the league did to him. I like the scene with Wally confronting Ollie, the dynamics between them are great. This issue also reveals that Captain Boomerang has a son, which becomes very important later on. Love the rogues; I’m glad they were kind of utilized in this series although it’s mainly just cameos, with Digger playing a substantial role. Another father son duo who gets time in this issue is Jack and Tim Drake which is foreshadowing some things yet to come. This issue ends with Jean being hung, leading us to believe Sue Dibny’s death was part of something bigger and all the heroes loved ones are in danger. 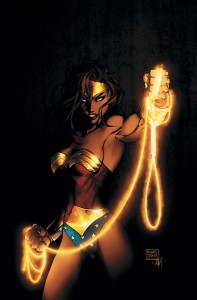 Of course, issue four starts with Ray to the rescue. Jean is safe and sound, now the league has to analyze Jean’s place. How are people getting into League Members houses undetected! This leads to a new possible suspect, Slipknot. And he is paid a visit by Wonder Woman herself, needless to say, if he did it, she is going to find out. I liked the scene of the villains sitting around, understanding that this does not bode well for them. The theme of fathers and sons is also present in this issue with Owen and Digger, and also briefly Jack and Tim. It’s been a long time since I’ve seen Hal as the Specrte and the scene with him made me miss the friendship between Hal and Ollie in the New 52. I like the brief tease of Green Lantern: Rebirth in that scene as well. I miss Lois and Clark being married, not a fan of the Wonder Woman/Superman relationship in the New 52. This issue ends with a threat against Lois. And with how powerful Superman is, you really don’t want to threaten someone he loves. 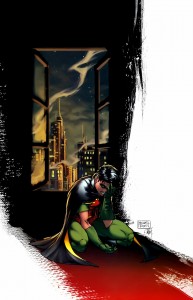 In issue five we see the Justice League following more leads. It almost seems as if they are running around like chickens with their heads cut off. Which is kind of true, there is someone out there hunting their loved ones. They are all feeling some sense of fear. One thing that struck me as odd in this issue is Firestorm’s death. It’s very out of place and since he is barely in the series, it kind of seems like a throw-away death. I like the reveal that Boomerang Jr. is a speedster and Golden glider isn’t the mother! For more on that check out Geoff Johns’ run with Wally West as the Flash, great stuff. Jack drake being threatened is one of my least favorite parts of the series because I know what follows. It is very difficult rereading the Jack Drake and Digger Harkness scene because both men are fathers who care about deeply their sons. Also watching Bruce and Tim riding in the Batmobile, helplessly, is very emotional as well. To me this is probably the saddest moment of the series but that might be because The Bat Family has always been one of my favorite things about the DC Universe. 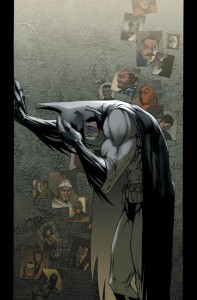 Issue six is an emotional one. To me, the scene with Batman holding a mortified Tim Drake is one of the saddest pages I’ve seen in a comic book, ever. Rags Morales does a perfect job of conveying so much emotion into one single page. I like the inclusion of the montage of everyone who has lost a loved one and then the scene with Ollie and Connor Hawke was great. Ollie still has his son and knows how dangerous the job is. It’s a nice moment albeit brief. And Connor Hawke is one of those things I miss from the New 52, him and Mia, the arrow family. Who in their right mind would mind wipe Batman? The justice League would. The “NAMTAB POTS” scene is strange to read because on the most basic level I understand what the league was trying to accomplish in an attempt to protect everyone but, c’mon, it’s Batman. In this issue we learn about the second vote, and how again, it did not sit well with all the members. Rereading this series has made me dearly miss Wally and his idealism. And I love that there is a lot of narration by Ollie, it’s a side of him that I haven’t seen in the New 52 and probably doesn’t exist anymore since they changed that character to be more like the on appearing on Smallville and Arrow. In the final pages we see Bruce as he thinks he has everything figured out and who the culprit is. After all he is the World’s Greatest Detective, but is he correct?

Picking up right where the last issue left off, issue seven 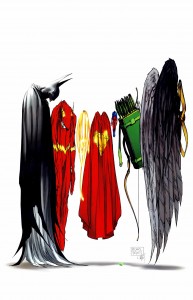 begins with Jean slipping up. This quickly takes all blame off Ray. Ray and Bruce quickly make sense of everything and figure out who benefits when family members of the league are killed. When I first read this series 10 years ago, I was surprised with the reveal in this issue. It seemed like a lot for someone to go through just to get their husband back. Mental illness is no joke and it does lead people to do desperate things as such. She winds up in Arkham where she belongs (where she will later become host the villain Eclipso). At this point, you just have to feel bad for Ray Palmer, he didn’t want this. People lost loved ones over this silliness. The moral of this story is that when you decide to be a hero, you aren’t just putting yourself at risk. Your loved ones are being put at risk as well and sometimes the mask won’t protect them, and sometimes it will. Everything is wrapped up neatly in this issue. It ends on the most positive note as it can with the storyline being as somber as it was.

Overall, does Identity Crisis hold up 10 years later? Yes and no. No, because with the New 52 relaunch, many stories were erased from the characters pasts. Yes because I feel like this was a time when the DC universe was in great shape and it did an event where the heroes were broken down and used to tell a more human story that did not have the traditional big bad villain and the end of the world agenda. If you haven’t read it, I would highly recommend it. The writing is fantastic, Brad Meltzer really gets these characters. Rags Morales does a great job with art duties and uses some celebrities as inspiration for the characters making them seem more human. It’s a great mystery. One of my favorite things about this story is that Batman, Superman, and Wonder Woman are not the main characters. They are supporting characters. With so many great characters in the DC Universe, I like when this happens. Much like the weekly series DC did ‘52’ where the Trinity was gone for a year. Both are great examples of DC letting their other stars shine. None of the villains were what I would classify as a big baddie either. They were less serious threats, mostly members of the Suicide Squad and that didn’t make them any less dangerous.

Rating 6 (out of 7) – If you haven’t read it, I hope this review enticed you to check it out. Because 10 years later it still is a great read, the characters, the relationships, and the story are all well done.