A few weeks on an episode of Dual Wielding, we jokingly made reference to something we later called the Hierarchy of Gaming. An unofficial pecking order that gamers (at least on the internet) have begun to use to speak less of levels of gamers. We just wanted to highlight this chart in an official capacity here on the website.

Before we get started though, I do want to say this is a gross generalization, I’m sure not everyone holds these attitudes (most of us on the site don’t for example), but as always we exist to poke fun at the absurd, and it does seem to be a rather strong behavior on the internet!

The “Master Race”- The unofficial title PC gamers have given themselves. The highest order on the peaking chain because when it comes to state-of-the-art anything, you don’t get any higher than PC games. Aside from the most up to date graphics on the market at all times, PC gamers will also note how superior the keyboard and mouse are to any other conventional means of control! Also tend to be seen lamenting the “Consolization” of big games.

The “Hardcore” Gamer- The highest order of console gaming (in a matter of speaking as you’ll see in a second), they want the latest console with the highest specs and love their AAA releases. They will often be seeing lament the death of the industry due to waggle, iCrap, and other useless genres!

The “Dudebro” Gamer- Technically speaking, a rung beneath the hardcore gamer, but they also have a tendency to think themselves equal or above the “hardcore”. The type of gamer who exists to play stuff like Call of Duty, Halo, Madden and Gears of War exclusively. Usually seeing lamenting anything that doesn’t fit the dudebro lifestyle of sports and shooters.

The “Motion” Gamer- The highest rung of the casual food chain because they still play games on consoles, but tend to be people who owned Wii exclusively, but have recently graduated to stuff like Kinect and perhaps the PS Move. The type of gamer who you don’t often see criticizing others because they don’t really have a presence on the internet, but are taught of more highly than the rest of the list.

The “Mobile” Gamer- The gamer who likes to live on the go, and wants disposable games. They are satisfied playing stuff like Angry Birds, Fruit Ninja and Cut the Rope. One and done experiences. Again, not really seen complaining about much because gaming isn’t a huge part of their game just the time it takes em to get from part A to part B. They are oftenÂ lambastedÂ for not really caring about games. Just downloading a bunch of free apps and calling it a day.

The Browser Gamer- These folks care even less about gaming than the Mobile gamer. They won’t even go out of their way to find games, just kind of randomly play games on Facebook and call it a day. Usually seeing comparing scores with friends or sending notifications/invites via Facebook. Really, considered the bottom rung of gaming.

Here is a more visual idea of the Hierarchy! 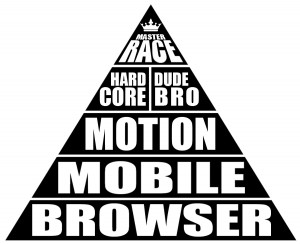