Disclaimer Time: Game of the Year awards are always based on opinions, there’s no scientific measurement to say that this game deserves it more than any other. I know off the back, people will ALWAYS have problems with a list, but people expect different things from their games and experiences. With that said, here are the top 5 games of 2010.

The beginning and the end of the Halo saga at least under Bungie. Has one of the more compelling single player campaigns in Halo’s history with a cast of rich and interesting characters, and while you know their mission was fruitless Bungie still made you a believer. The multiplayer is decent while it does have its share of problems, the new cR system, armor unlikes and challenges makes it fun to come back to day after day. 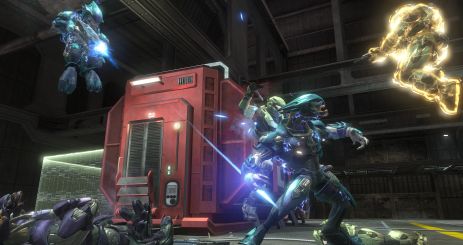 It has to be said, this game is easy, I mean there is literally no way for you NOT to beat this game aside from getting bored and putting it aside. With that said, what this game lacks in a challenge it makes up for in aesthetics, creativity, music and just overall charm.

The game has one of the most unique and pleasing visuals of any game released in the last decade. Not only does it look unique, but Nintendo and Feel Good, did a tremendous job of tying the visuals into the game itself. If you do not wear a smile while playing this game, your soul may be corrupted. One of the most charming moments of the game comes when you encounter a sad teddy bear, but when you stitch up his wound, he wears a nice smile and has a lollipop made of beads!

How does your heart not warm for this?

Like I said before not the toughest game on the planet, but the game oozes creativity and the thrill of not knowing what came next or how the world would open up really drives this stage. A fun and cool overworld map some awesome level design, makes it a must play for any platforming fan.

In a year with the final chapter of Halo, a new Call of Duty, Battlefield and Medal of Honor, how is it that a Wii FPS took the spot of top shooter in my book? Two words, James Bond. I know, how does James Bond justify this being a top shooter?

On the surface, this game has a ton of reasons to be awful. It is a cash in on a game that was popular 13 years ago. It pretty much looks like it steals the Call of Duty engine, and let’s face facts, being on the Wii means it probably isn’t the prettiest shooter on the market.

Yeah, the game is a bit rough around the edges.

With all of that against it, it comes off feeling as one of the most refreshing shooters released in a long time. The combination of modern shooter elements, some old-school Goldeneye and stealth really does make for a one of a kind experience. And being that this is based off of a Bond movie (we won’t get into whether it is based more on the movie or the original game), you get the type of tight knit story and adventure that is sometimes missing from games. Every level serves a purpose and flows with the plot.

To add icing to this wonderful cake, it is one of the few online Wii shooters and has a solid roster of offline matchmaking options.

I’ll get it out of the way, I think the “plot” of this game is laughable for such a big story driven franchise. The characterization on the other hand isÂ phenomenalÂ some of the deepest characters to grace a video game. I mean who doesn’t remember Mordin’s special song? Or the intense exchanges between the Commander and any of his crew? Or the climax as you worried and wondered, which of your teammates would survive?

The game plays as the perfect mesh up of action/adventure/shooter/RPG on the market, sure no individual genre is really the best in its class, but there is no other game that combines the elements as well.

One of those games you just have to play.

I think that pretty much sums up this game. And game is probably the best way to describe this masterpiece. While every game on the list has its charm and works well, there is no other game that cut the fluff as much as Galaxy 2 to give you one of the best pure gaming experiences not only of this year, but of the generation.

There is more variety and creativity on display in a single world of this game then has been in entire franchises. The music is still just as catchy and memorable and the power-ups just the right amount of unique look and feel as you would expect from the Mario franchise.

Even after you have bested Bowser, the game throws in an additional special world and then an entirely new game as you hunt for Green Stars.

Super Mario Galaxy 2 is a must-own masterpiece, and my game of 2010.