From Fandom with Love: The Spy Who Loved Me

Our viewing order for the Moore-era is all over the place. Partially due to my 151 Proof Movies partners wanting to do a mix of bad and good films, which didn’t exactly fit into a proper viewing order. So yes that means I’ve watched Live and Let Die, Moonraker and The Spy Who Loved Me before doing Moore’s 2nd film. That’s the way the cookie crumbles, and currently in the process of righting that wrong.

In the interim, I felt it only right to talk about The Spy Who Loved Me especially since the 151 Proof Hangover article fell by the wayside.

The Spy Who Loved Me is the 10th Bond film and the 3rd to star Roger Moore. After some interesting experiments with the formula, Moore finally find one that really works for him. Works so well in fact they pretty much repeat it the following film with Moonraker.

As always let’s start with our friends from Wiki,

The storyline involves a reclusive megalomaniac named Stromberg who plans to destroy the world and create a new civilisation under the sea. Bond teams up with a Russian agent Anya Amasova to stop Stromberg. 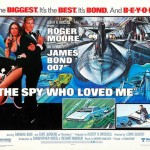 While that is the gist of the plot. The real interactions comes between Bond and Anya, who is the first female counterpart in a Bond film. While they are both seeking Stromberg, Anya is also looking for the man who killed her lover. Of course the audience knows it is Bond from the opening, but Anya doesn’t find out until near the end of the film. It creates a fun tension between the two.

This is one of those plans that’s so grand, it’s actually kind of stupid. I’ve never really been a fan of the whole destroy most of the world to create a perfect society plots because it seems like it just has too many problems.

In Stromberg’s case, he hopes to destroy Moscow and New York with nuclear missiles. This could trigger a global, nuclear, all-out war, in which he and his crew would survive on-board his water-base, Atlantis.

The plan really isn’t that interesting, and the fall-out.. which is a mostly inhabitable Earth for decades to come seems extremely short-sighted.

Either way, this plan gets an AGENT rank for being rather amater-ish and short-sighted.

The Spy Who Loved Me is a solid Bond film. Ironically for a title that specifically references the Bond girl, the film really does lack a compelling and interesting Bond girl. To me, at least.

Naomi– She is Stromberg’s personal assistant and pilot, and does some of his dirty work when the situation arises. There’s really not much else to her. She is killed by Bond at some point. DEAD 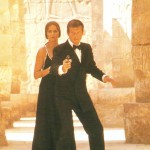 Anya Amasova– aka Triple X. Anya is portrayed as the first Bond girl in a film that could be an equal to 007 himself. She even outwits and outmaneuvers Bond at certain parts of the film. And like I stated before, their hidden tension is something that drives the film’s narrative. The problem is I feel that she comes off as robotic a lot of the time. I get that she is driven by her mission and driven by revenge, but she lacks much of a personality. Even some of her exchanges come off as forced and stilted at times. For all the grief that Roger Moore gets as Bond, there’s one thing you can never deny.. the dude had charisma. So to put someone so lifeless next to his Bond only draws attention to how dull a character she is. LIVE

I mentioned in Live and Let Die write-up that a lot of Bond-isms in the Moore-era are of the one-liner nature. In the case of The Spy Who Loved Me, it is no different.

That’s the Bond we know and love.

Once more there’s really nothing sporting about this movie. GAH! >.<

A View To a Kill:

The opening sequence is okay for the most part. I will say this, Bond films do a lot of things right.. but they REALLY do skiing sequences well. I loved the one in On Her Majesty’s Secret Service and the one in this movie is just as enjoyable. I don’t know what it is but there’s something about skiing that’s exciting to watch in a chase.

Small note, and this is going off memory so can be wrong, but I believe The Spy Who Loved Me is the first Bond theme song to not actually be named after the movie. (Granted Dr. No’s theme is called the Bond theme, but it’s an outlier in general). In the case of this movie, the theme is actually called “Nobody Does it Better” and when it comes to Bond that’s generally the case!

As for the actual theme song, I actually enjoy it. It was still during the era where most Bond themes were very romanticized. Granted in this case it makes the most sense since the title and the movie does deal with Bond’s love to a foreign agent so it works.

The opening credits are actually pretty nice. It works in a lot more Moore (odd phrasing) than I remembered, but works remarkably well. I love the sequences with the guns doing circus tricks on the gun barrel and the part where they all line up to attack Bond. It’s colorful, it’s unique, it plays with the themes of the movie, it has it all for me!

The Spy Who Loved Me is an interesting movie. I like it in spite of itself, it would seem. I do have my problems with the film, but overall it works well. Especially for a Moore film. This is sadly one of his best!