Marvel Comics has long been a revered name in nerdom as it encompasses such a far-reaching variety of beloved characters and universes, many of which have also starred in popular television shows and blockbuster Hollywood movies. While the original X-Men and Spider-Man movies produced by Fox and Sony, respectively, were fun first forays into the emerging comic book hero movie genre, in 2005 Marvel announced a bold new [foray] into the film industry. Marvel Films (now Marvel Studios) would begin self-financing their own films, rather than license them out for film studios to make, which ensured them complete creative control over their movies. This began the barrage of high-quality, Marvel Studios-produced movies that this weekend culminated in the spectacular The Avengers.

Meanwhile, video games based on Marvel properties still follow the license-to-third-parties model, and their quality has immensely suffered from it. There have been a few notable gems, but more often than not the games have been mediocre or worse, and often are relegated to a low-budget, truncated development run so they can hit the shelves in time to be merchandising tie-ins to their respective movies. While Marvel games have largely stagnated, rival DC has cultivated success by allowing Rocksteady Studios to create a Batman game that truly plays to the strength of that hero in this medium, independent of the highly successful film franchise by Christopher Nolan. Batman: Arkham Asylum and its sequel, Arkham City, are remarkable games that have earned the praise and adoration of the gaming community.

Marvel has created an entire Cinematic Universe in the film medium, and it’s time to seize this strategy and apply it to the ever-maturing game medium. Who would better know how to apply its characters and worlds to this audience?Â  In order for this to happen, Marvel needs an in-house team–its own “Marvel Interactive” division if you will–to create games that can truly capture these characters. Such a studio would also add quality jobs in this industry and would surely attract top talent. Rocksteady has set the bar high for DC, and Marvel needs to respond. The market is yearning for great games based on these properties, but they need the funding and attention to detail that the films get. Letting others make marginal representations on the strength of borrowed licenses is not enough.

Further strengthening the cause for an in-house strategy is the wide variety of platforms for games to be developed for and thrive on. Of course, more well-known characters could fuel AAA console games (dare I hope for an eventual ensemble Avengers game?) while more niche ones could build an audience through lower-barrier platforms like iOS. There is a wealth of possibility in all the amazing interactive experiences that could be crafted for and around Marvel’s stable of icons, and Marvel would do well exert itself a little and seize this natural fit.

While the possibilities are endless and the potential undoubtedly there (let’s face it, video game protagonists tend to have super-hero like qualities and are part of very action-heavy storylines), the reality is that Marvel’s farming out of its properties has resulted in low-quality products that tarnish both the Marvel brand and the fan experience. To illustrate this point, I have culled together the chart below featuring all major titles based on major Marvel properties released during this console generation: 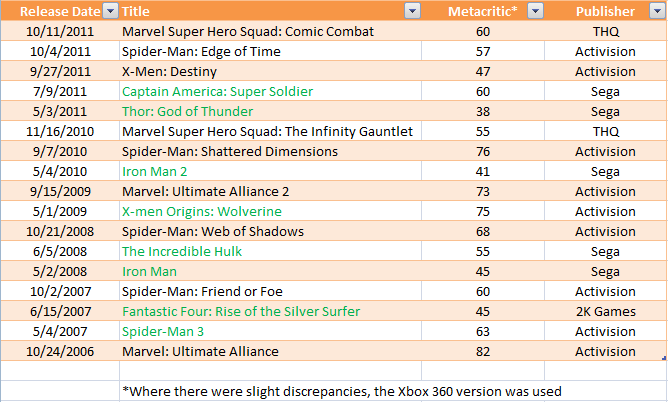 While Metacritic is often (rightfully) criticized as an imperfect quantification of a wide range of review scores, it nevertheless is the most relevant source. I would personally rate some titles on this list a little better (Captain America) while some I would rate far lower (Spider-Man 3, the Iron Man games). Debating the nuances of review scores isn’t the point; what is the point is that these games are generally lackluster and even the few “good” ones feature lukewarm scores. Scoring in the 70s is not necessarily bad by any means, but when that is the effective peak,Â there is a problem. The actual peak this generation came in its very first release,Â Marvel: Ultimate Alliance, all the way back in 2006. It has been downhill since then and it’s time for Marvel do what is right and what is necessary, for the fans, for themselves, and for these wonderful characters and universes. Superheroes and video games should be a no-brainer marriage, and it’s frankly embarassing that Marvel continues twiddle its thumbs instead of crafting its answer to Rocksteady’s sublimeÂ Arkham games.