Here are a handful of comics from this past week. 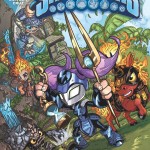 Jumping into any book with a random number would be confusing, but Skylanders #4 was confusing for none of the usual reasons. Instead of feeling loss with the story or the characters, I was more at a loss for the format of the book. It is divided into two stories that don’t seem to be related, other than being in the Skylander-verse. The first seemed like a continuation of a story from the previous issue, and the second ends in a cliffhanger so I wasn’t quite sure why they would include two halves of two stories in one book, it just makes the entire thing feel incomplete.

In addition to that, the art makes a drastic change in-between the two-stories. I found the first to be really sharp and nicely defined. The second gave Spyro a frightening expression the entire time, I just found it distracting.

Captain Victory and the Galactic Rangers #4 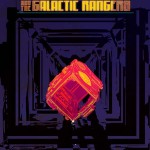 I don’t mind a book with its unique spin on things, but spending half your book with some scientific mumbo-jumbo doesn’t make for the most exciting read. The first half of this book was really kind of drab and boring. Even a fight with a giant alien creature did nothing for me. But once the book found a focus and we got to hear of Captain Flane’s adventures, it really picked up. Interesting story, nice twist and of course led to the giant cliffhanger. The art was a bit of a mixed bag, at times I found it a bit too busy which again made it hard to focus on what was important or even know what should have been important. At the same time, some of the details in the pages were fantastic, and really sold the emotions of many of the characters. Again, Captain Flane’s fire-side chat being a personal highlight. 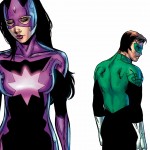 I’ll let you in on a little secret, some of my favorite superhero comics aren’t even when the characters are being super-heroic. Take Green Lantern #38, which sees Hal on a forced “break” on Earth, Guy and Barry Allen decide to accompany him drinking, and it makes for a really fun read. As they “play” pool, get into a drunken fight and vent their problems. The issue isn’t entirely lite though as Carol shows up and really kind of gives Hal the speech he’s been needing to hear since so much crap has been going on in the Lantern world. It’s funny for a book that has a Green Lantern, Red Lantern, The Flash and Star Sapphire that we spend about 2 pages with anyone in costume, and still have fun.

It wasn’t all sunshine and rainbows though. I felt that the art in this book was really flat. Nothing stood out as particularly motivated or clever. I guess passable would be the best way to describe it.