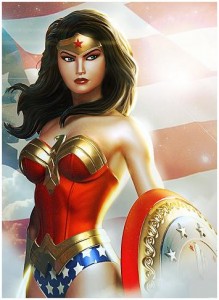 Centuries ago there was a great war between the Greek Gods. Hades was tired of being stuck ruling the underworld and took his undead Army to fight Ares and Zeus and was close to victory. Hades sent out his own creation of Cheetah like women. Zeus had a plan of his own. he summoned the Amazons, a proud and fierce race of warrior women, led by Queen Hippolyta, they were the turning point in the war and brought death to the undead army as well as the Cheetah women. After Hades was defeated and pushed back to the underworld, the Amazons were given the Island of Themyscira. There they could all keep their youth and be rid of the problems of men. With accepting this they had to keep any prisoners from the war on the Island and keep them locked up forever. Ares would bring these prisoners there and overtime fell in love with Queen Hippolyta, who became pregnant. Ares returned one last time, bringing with him the last surviving Cheetah woman. Areas saw the birth of his daughter and told the Queen the child is special and would one day leave Themyscira. He also told her his duty was done and that he would no longer return to the island. Over the next few days Hippolyta received gifts from Zeus for the Princess Diana, a Lasso of Truth, and Indestructible Bracelets. As Diana grew so did her powers of great strength, endurance, fast reflexes, and flight. She never knew about the gifts from Zeus because the Queen kept them hidden not wanting her daughter to ever leave the island.

One day a plane crashed in the ocean (the tail of the plane had Farris Air on it) and a man washed up on shore of the island. The man called himself Steve Trevor, he said he was on his way back to Farris Air when he lost control of the plane. The Amazons not trusting Steve were ready to lock him up but Diana decided to help him and begged to get him home. The Queen agreed but Diana would not be the one to return him home. Over the next couple of weeks Diana helped Steve recover while Steve tells her about the outside would and she becomes very interested. Steve begins to fall for Diana, while Diana falls for the idea of life away from the island. The day comes for Steve to leave and the woman responsible to return Steve is confronted by Diana, she begs to take Steve home and finally the woman agrees and tells her not to tell the Queen, and also tells Diana about her gifts hidden away. Diana finds the lasso and bracelets returns back to Steve and leaves the island.

Diana and Steve arrive in Coast City and Diana is amazed by everything. Steve keeps her in his apartment while he lets everyone know he is back. Meanwhile, the Queen learns that her daughter is gone and is furious. Not thinking and letting her emotions get the best of her and fear that if she leaves she will lose her youth; she goes to the cells and talks to Cheetah. She agrees to release Cheetah if she brings Diana back unharmed and will allow Cheetah to live a normal life on the island forever if she helps. Cheetah agrees, secretly wanting revenge and willing to take it out on the Queens Daughter.

Diana amazed with everything has Steve explain how life is like in this world. She sees a copy of the daily planet saying Superman Earth’s Hero, and asks Steve about it. Steve tells her how he is a hero and helps people and wants to do good. She tells Steve she wants to be a hero. Steve tells her she can, but after they go on a date, Diana not understanding what a date is agrees because she is hungry. The whole time Diana is talking about being a hero and Steve tells her how he feels (without her really listening) and says how she is a wonderful woman. She responds that can be my hero name “Wonder Woman” Steve laughs says its lame but might work. 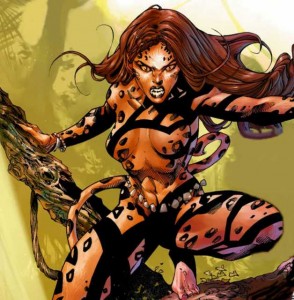 After the date, Diana puts on a costume and goes out to help people. As she does good someone asks her name and she says “Wonder Woman” the next day Steve wakes up not knowing Diana left and sees her sleeping, he grabs the paper and sees the headline, First, Superman now Wonder Woman! Steve wakes her and shows her and tells her she needs to be careful, and a better costume. He helps her create a costume worth of Wonder Woman, and finally gives her a tiara since she is a Princess. After helping many people she gets attacked by Cheetah. Diana uses her Lasso on Cheetah and ask she she is, we get a flashback of the war and that she had to be locked up because there were no heroes on earth that could stop these evil prisoners. Diana asks why she is attacking her just as Cheetah slips out of the lasso and runs off.

A few days later, Cheetah returns and this time Diana is ready and lassos cheetah after beating up on her a bit. She questions why she is here and revels that the Queen is behind this and that Cheetah want revenge and is going to kill Diana. Diana, feeling rage, something she gets from both her mother and father, tightens the lasso and actually kills Cheetah. Diana struck with sadness returns home to her mother. She explains what happens, her mother sorry for doing what she did calms Diana down. Diana tells her about the outside world and Superman. She tells her they call her Wonder Woman and she is helping people. Her mother is very proud and tells her to keep the world safe. Diana tells her she isn’t ready and wants to stay home for a while to train before returning to help people.

We then cut to Zeus meeting with the other gods, who were looking down on this. Well we have done what we needed our time on Earth is over, soon Wonder Woman will meet with the other heroes and keep Earth safe. These new gods will do whatever they can to stop the clan.