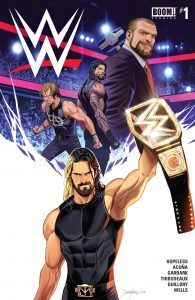 Comic books have been home to franchises from all walks of entertainment, movies, TV shows, cartoons and music. It also isn’t a stranger to adapting the wide and wacky world of professional wrestling. From the days of the Ultimate Warrior bizarre comic in the 90s to Kevin Nash turning himself into a walking sex machine, sports entertainment has been ripe for material.

I was excited to see what the folks at Boom were cooking up so picked up WWE #1 and was… well disappointed. Like this was a simple re-telling of the Seth Rollins saga from the summer of 2014 to WrestleMania 31. The only real wrinkle that it adds is some backstage drama with Triple H, which actually makes Rollins seem like a weaker character. Who knew even in comics, HHH could bury talent.

One bright spot, we did learn that apparently Dean Ambrose and Roman Reigns enjoy potato salad at their cookouts.

Really nothing else to say. It was disappointing read story-wise especially if you are like me that lived most of the angle. And the hook doesn’t necessarily seem to offer anything new or interesting to come.

The art though is a whole different ball game. Wrestling allows the artists to really kind of draw normal scenarios in a more colorful manner.  Take the opening pages for example with Seth Rollins ascending the ladder. There’s a great panel from above as he is reaching up for the briefcase. But my favorite is just a few panels later as you see the image of the Money in the Bank briefcase reflected in his eyes. So many great emotions and facial expressions throughout the comic.

Wrestling is also the bridge gap between our world and the world of the superheroics. Sadly, Seth Rollins and The SHIELD don’t have the most colorful attires, but we did get a brief glimpse at the Usos. Actually a bit of the more colorful elements of the WWE would have been much appreciated, but I guess you can’t really force it when re-telling a story.

Review: 4 (Out of 7) – Nothing wrong with the book, but it really doesn’t excite no take enough creative liberties to be fun.