Nearly a week after “Wonder Woman” made her first solo silver screen outing, DC delivers this one-shot in the dead week between issues #23 and #24 of the Greg Rucka- 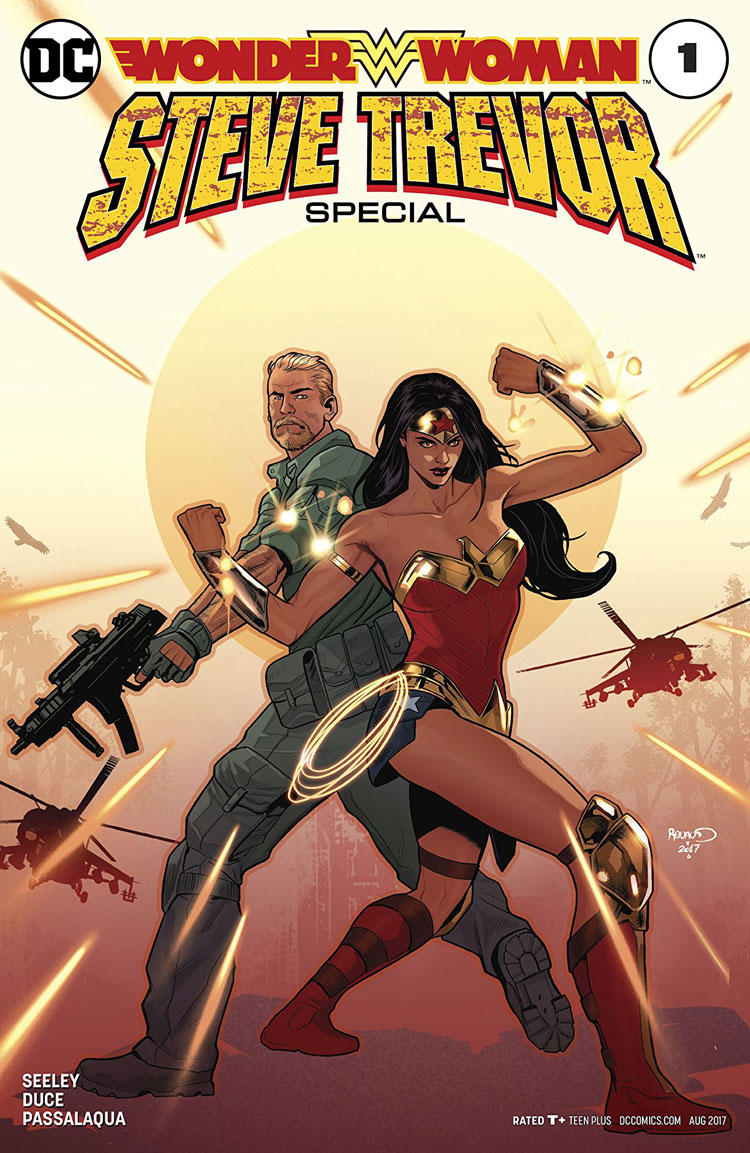 penned main series. The opening scene has Trevor in the clutches of some “meninist” terrorists before his Amazonian bae crashes the scene and cracks some misogynistic skulls. From the cover I assumed Ms. Prince and Steve would be kicking ass and taking names together but it’s not long before Mr. Trevor is whisked away on his own separate mission. As a treat to viewers of the recent film (and perhaps as an extended greeting to curious newbie fans looking to dive into the character) Steve’s modern day team is identical to the one he has in the film: names, ethnicities, and skill sets preserved (don’t think about continuity too hard – it’s a comic book).

Given the comedic opening with the titular power couple taking out buffoonish goons and a title page that reads “Wonder Woman’s Boyfriend Steve Trevor In…” I wouldn’t have faulted the comic for continuing on a firmly light-hearted track. But once Steve links up with his crew, we get an “A-Team”-esque rescue mission as they battle Saturna and the Crimson Men. Seeley’s characterizations and jokes keep what could have been a very bland premise engaging but it was the art that really sucked me in. The facial expressions are especially on point. There is a 3 panel sequence where Steve goes from being strangled, to being released and super pissed-off, to finally delivering a mean hook to a deserving baddie – all superbly depicted. Dare I say I enjoyed the visuals here more than I have in some of the “Wonder Woman” Rebirth books.

Seeley gives all members of the team time to shine and let off a few laughs, but is able to keep the story on track for a somewhat serious finale. I don’t think the world is clamoring for a “Steve Rogers and his Howling Commandos” series but if their appearances in the main title (or in a few more one shots) are anything like this I’m game.

Review 5 (out of 7) – a fun, self-contained adventure with Wondy’s bae & co. accompanied by some fantastic art.