Last week’s trip into The Twilight Zone left me with a bad taste in my mouth and it was with some reluctance I went back for more. J. Michael Straczynski’s credits on the 80s revival of the TV series nor his work on The Real Ghostbusters or World War Z were enough to tame my skepticism. Sure, he can write for TV and movies, but comic books? I hadn’t read his run on The Amazing Spider-Man and avoided Before Watchmen. Furthermore, I was unsure if 2 dozen or so pages in a serialized format were able to capture that Rod Serling, thinking-man’s genre-fiction essence. Oh, how wrong I was. 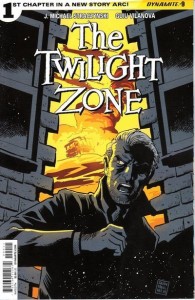 “1st Chapter In A New Story Arc!” the cover announces, with “Act One” stamped on the first page. JMS is spinning “The Way Back” into a multi-issue yarn, giving it ample room to stretch and breathe. We are introduced to our PI protagonist, Roy Chambers, who is about to be removed from a case by his wealthy client, Mr. Black. The back and forth between the two in the opening pages isn’t just a sneaky way to spew exposition – it’s a great way to show who our characters are. There’s no faux-Serling monologue this time around but I was drawn in all the same.

There may be some who will roll their eyes at the clichés in play here – the down on his luck private eye looking for redemption, his stripper girlfriend with a heart of gold, the rich/dying man hiring a PI to solve a seemingly unsolvable mystery, etc. Even the fantastical turn at the end of this book is a classic device. But clichés aren’t inherently bad. It’s all in execution, and damn if these familiar tropes aren’t used well. We even get some non-hammy political subtext, which is very welcome after last week’s shoehorned messages.

The art finds its own way to stand out, particularly with the panel arrangement. One sequence has Roy interviewing a witness and we get one dialogue-less panel, which really elevates the scene with that extra pause. This is followed by a montage of Roy hitting investigative dead ends framed on a silhouette of his stubbled face. Not crammed into a single issue, the story has space for these fancy flourishes, which make me excited for what’s to come.

Review 6 (out of 7) – Dialogue and artwork are on point. If you’re looking to get in on a mini-arc can’t really say more but, “Jump on in, the water is fine… in the Twilight Zone.”