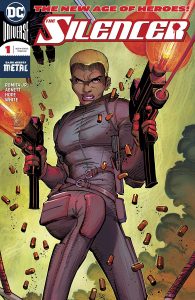 DC’s “New Age of Heroes” moniker seeks to inject new characters and worlds into the DC Universe, and doing so by taking inspiration from other comic publishers, movies and forms of entertainment. The Silencer feels like a book that takes a dash of True Lies, mix in a bit of Midnighter, a sparkle of James Bond and we’re in for a good time.

Honor Guest, one of those names you can only get in comics, is an ex-Leviathan member who has settled into her new life quite well. She has a loving husband and a young son, she affectionately calls Jellybean. But as countless movies and TV shows have shown us, you can never truly “get out.” And her former life comes knocking while she is out shopping with her son.

As she is putting away her purchases, she is confronted by an assassin called Killbox and a fight ensue. During the fight, we are shown Honor’s powers or at least some of them, as she is capable of generating a cone of silence, which will come in handy for sneaking around her family such as this fight. Though the extent of her powers weren’t entirely clear to me by the end, it does give them room to expand on it.

Visually, her powers look nice on the page. Enveloping the action within a blue sphere, the characters take on an electrified appearance while engaging in combat. It gives the fight a bit of life and puts the focus on the characters and nothing else. The pain comes through the pages and you really feel for Honor, and I guess Killbox.

Bonus points for the fight starting off with Honor using colored pencils. 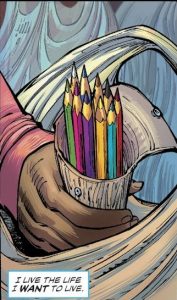 Colored pencils good for arts and craft and murder.

During the fight, Killbox is able to gain a brief advantage on Honor by pulling her by her hair. It’s a dirty move to be sure, but it does give us insight into how comfortable she has gotten in her new life, and we also know from the opening pages that she will be giving it a trim. I appreciate when a character’s appearance change has some plot significance. It sets up an interesting dynamic as well, how will her family react to her changing appearance, the odd behavior and random explosions.

While the superpowered/assassin stuff is fun, I am most intrigued by the family aspect of the series. In the “olden” days of comics, I’d imagine the series would play with her always disappearing and making some lame excuse at the end of each arc that her family laughs off. But we’ve kind of gotten away from that element of story-telling in comics and have to imagine that the family will be bought in on her secrets sooner rather than later so how do they react? How will they be bought into the world? And what will Honor do to protect them?

Review 5 (Out of 7) – The Silencer adds a new flavor of comics to DC’s stable of books, but the first issue isn’t without its problems. That said, it’s a fun start with a lot of interesting strings to pull at in future issues.