Superman: Rebirth may have the most difficult tasks of all the “Rebirth” books. It is one of the only books that centers on what is essentially a new character, at least to the New 52 universe. It must also address the fallout from the death of the current Superman, one of the most well-known and beloved characters in popular culture. As a whole, this issue by Tomasi and Mahnke sums up the previous storyline rather well on the first page, but from there, the comic meanders through the transportation of the ashes of a deceased Superman by an older one from another universe (confused? See next paragraph) without meaningfully setting up future storylines. 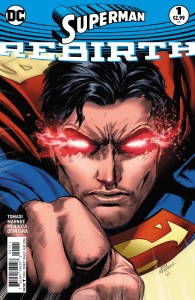 Okay, let me explain (or try to at least). Before the Flashpoint event there was a DC comics universe with all of our favorite heroes: Superman, Batman, Wonder Woman etc. These are the characters we grew up with and were the basis for cartoons and movies (more or less). Then, the Flashpoint event occurred in 2011 and there was a full reboot (with minor carry over, but we can get into that another time). Superman was younger, formed the Justice League, and was a more cocky and brash hero than we’re typically used to. This upset a large component of the fan base, although it would be unfair to say the character was universally disliked. About a year ago, the Convergence event occurred and characters from different universes were thrust together to fight to the death. The heroes ended up winning the day (as usual) with one major consequence: the Superman from the comics before the New 52 and Flashpoint ended up in the New 52 with his wife Lois and their son.

Now, back to Superman: Rebirth! I have to say, the old Superman (now the only Superman) gives a touching eulogy to the fallen younger Superman. It makes you understand why he stayed away and hasn’t interfered for years and why he has recently become more active. He’s torn because he wants to help, but this isn’t his Earth, reflecting the defining aspect of Superman; he is an immigrant from somewhere else, except instead of being from a different planet, this time it’s a different universe.

The rest of the issue follows Superman and Lana Lang (which delighted me as a huge Smallville fan back in the day) as they take the dead Superman’s ashes to various locations. Something is going on with Lana; she has the memories of New 52 Superman, or at least some of them. This storyline will surely come up in future issues, whether its Superman, Action Comics, or the new Superwoman book starring Lois Lane (New 52 Lois Lane now has Superman’s powers as does a Chinese teenager). There is also a retelling of the Death of Superman storyline in which the older Superman died and came back to life. This is partly why Superman is not too worried about the death of the New 52 Superman. Over the course of the issue, Superman realizes that he needs to step up and become the Superman for this world, although he does seem to give up on the rebirth (get it?) of the New 52 Superman rather abruptly.

To be honest, I was not really impressed with the art in this issue, it was serviceable, but did not stand out in any demonstrative way. Personally, I wasn’t fond of artist’s depiction of faces, which is most of my criticism; the environments were well detailed and there are definitely some cool visual moments. For me, the writing was a bit exposition heavy, although to be fair, there was a lot to catch readers up on. The only action in the comic is the retelling of the Death of Superman storyline, an event that some look at with disdain, and is arguably the origin of the phrase “no one ever really dies in comics.” The scene is also a flashback, which longtime fans will already be familiar with and new readers mostly confused by.

Superman is one of my favorite characters, as I find it fascinating to see creators try to tell stories with a hero whose power levels and moral standards are equally lofty, sometimes to the frustration of readers and even other comic book characters. Superman: Rebirth tells the story of someone that hasn’t really been involved in the New 52 and I’m excited to see how he interacts with this universe of characters once he finally embraces being the Superman for his new home.

Verdict: 4 (out of 7) – Superman Rebirth doesn’t do a great job of getting new readers on board, but for those that have been following the story line its a nice sendoff to the New 52 Superman.