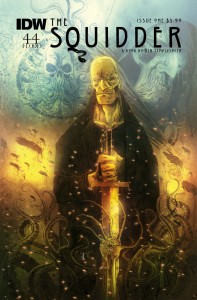 Right off the bat, you can tell there’s going to be something… not quite right about Squidder. The title alone conjures images ranging from evil fishermen capturing squid for their color changing abilities to cephalopod superheroes basting their enemies with high pressure jets of ink. However, and perhaps for the best, Squidder #1 is none of these things. Horror veteran Ben Templesmith has come to give us a Lovecraftian tale of evil interstellar squid and their genocidal war with the human race. Sounds a lot cooler than my ideas doesn’t it?

Squidder begins with a scene straight out of your darkest nightmares. An aged crone offers up a young girl as a human sacrifice to a fleet of gigantic squid monsters. The suck the hapless girl into their maw and then proceed to completely incinerate the entire town. It’s pretty horrifying. The narrative then switches to the center of our story; Hitchins, the Squidder. Once a member of the Squidder Legions fighting the war against the invading Squid, now his fighting force and the human race have been decimated, leaving him as the last of his kind. Simply surviving day by day, not truly caring whether his existence goes on or not, he’s eventually recruited by a local slumlord to capture a Temple Priestess, the very group that invited the Squid to earth and sealed humanity’s fate.

Squidder’s tone is darker than dark. It’s a dreary, terrifying world that Templesmith has created. For some reason, even though they have very little to do with each other, this reminds me quite a bit of Priest. Probably because they both feature a kick ass protagonist that is the last of his kind, in a post apocalyptic world. I suppose that’s good enough for me. I’ve not read much of Templesmith’s other works but this one appears to be heading down a very dark gritty road, and so far I like what I see. The artwork is gory and sometimes a bit hard to discern details due to it sketchy nature. The coloring shines, especially in the immolation panels where everything in site is incinerated. I could almost feel the heat coming off the page.

As far as action horror goes in comics, it’s hard to find anything better than Squidder right now. American Vampire is obviously king and is head and shoulders above everybody, but this book deserves to be mentioned in the same breath. I really hope it continues down a dark path and that we see more of the Squid and why there here. If you like your books graphic and with nary a hint of hope for us Earthlings to be found, this one is definitely for you.