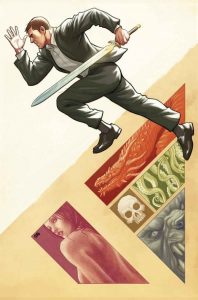 Frank Cho’s new creator owned series Skybourne is a true study in style over substance. Even though he’s become more famous for his “Outrage” convention sketches than his interior work, Cho is a gifted artist and storyteller. His art in Skybourne #1 is incredibly violent, but also thrilling and cinematic as the protagonist, Grace Skybourne, uses her super strength to punch faceless’ goons heads off as she and her team retrieve the legendary sword Excalibur for some reason or another. Cho packs each page full of panels as Grace and her opponents spar verbally and eventually physically before he opens up the pages for car and foot chases and even throws in a little magic at the end.

Cho’s art in Skybourne is an almost perfect marriage of realistic figure drawing and powerful cartooning as evidenced by as scene where Grace throws a goon right at the reader off a rooftop in a stunning use of perspective accented by yellow background colors from Marco Menyz. Grace Skybourne is kind of a badass until she isn’t for cheap shock value as Cho decides to kick it like it’s 1973 (Gwen Stacy) or 1994 (Alexandra DeWitt) and kill off his main female protagonist on the final page as she is gored by a sexist wizard. This is before Cho really develops Grace’s personality beyond she is a good fighter, mysteriously connected to Excalibur, and likes to use profanity. My reaction to the final page was a resounding “Who cares?”

Character deaths are so prevalent in both TV and comics so a writer should have a good reason to off them. Cho just decided to play a slightly misogynist game of misdirection by setting up a competent female protagonist and then using her as motivation for her brothers (introduced on the title page) to avenge her. Or it could just be a cheap comic book cliffhanger. Who knows? Cho is a talented artist, but his writing is subpar. His dialogue seems to consist of censored profanity, sexist insults by the “bad guys”, and repeating plot points ad nauseam.

Minimalist plotting isn’t necessarily a bad thing and has been the bread and butter of Warren Ellis’ recent Marvel books, like Secret Avengers, Moon Knight, and Karnak as well as kick ass action movies like The Raid, John Wick, and Dredd. Cutting the subplot fat and focusing on the action can be extremely entertaining. Except the characters in these comics and movies actually wanted something and had a personality beyond retrieving a sharp, pointy object, which is what Skybourne #1 is all about. There is a vague mythical background alluded to into the first couple pages, but Cho doesn’t connect it to the main action.

Skybourne #1 is a comic book length exercise is fridging that has some wicked action scenes, but Frank Cho utterly fails at making both his protagonists and antagonists likeable or interesting. The comic has a Mark Millar in the 2000s vibe, but Cho lacks Millar’s sly Scottish wit and makes the rookie storytelling mistake of killing off the character readers are supposed to like before we connect to them emotionally.