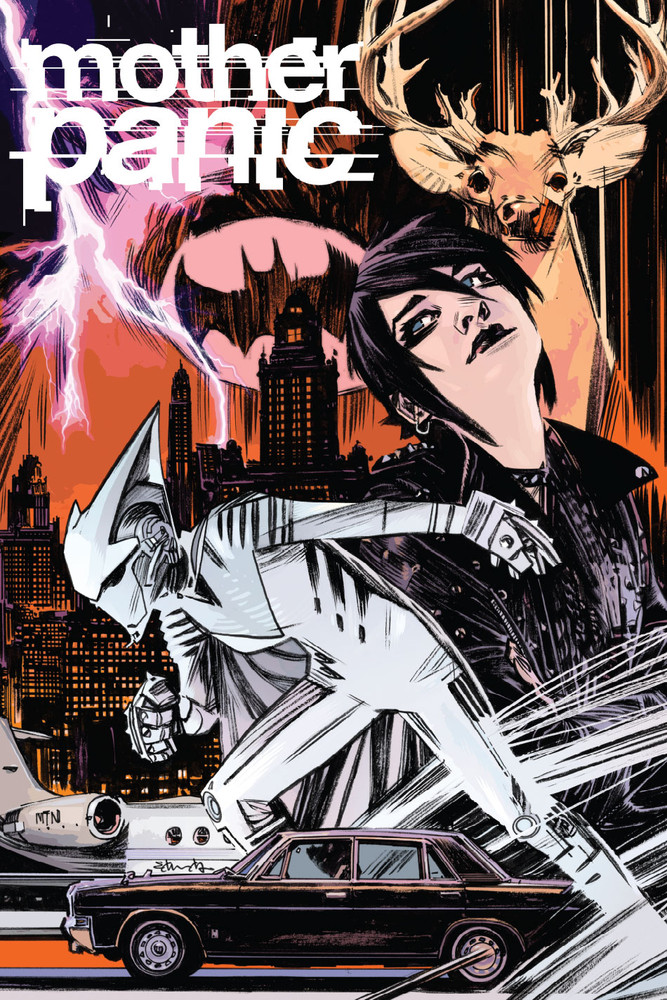 There’s a new vigilante in Gotham City, and she is completely unaffiliated with Batman and his crew with a tragic, day-glo backstory courtesy of artist Tommy Lee Edwards that is revealed in a fragmented plot from Jody Houser. In Mother Panic #1, a girl’s father is tragically murdered, and she vows to avenge his death with the help of her insane, constantly singing mother. Yes, we’ve seen this story in dozens of works of fiction, but Houser and Edwards soak the traditional vigilante story in a tasty layer of subversiveness with gruff one-liners, and a bad guy that is more of a deadly combination of patron of the arts, gangster, and philanthropist than the usual costumed clown in Gotham.

The strength of the Young Animal imprint at DC has been its art and coloring, and Mother Panic #1 is definitely no exception with Edwards handling both. He is a multi-talented storyteller who can do everything from big poses like Mother Panic punching out criminals or Batman investigating in the wake of her activities to negative space as the sad flashbacks of Violet’s life are filled with shadow from the black gutters to her raven hair. He also uses color to punctuate emotion like when a journalist tries to ask Violet about the death of her father on what was just an ordinary camping trip, and she grabs his arm with a touch of red in the background. Edwards doesn’t waste any gestures with each one showing Violet/Mother Panic’s anger at the world around her and desire for justice in a more blunt way than what the Bat-family usually provides. The monochromatic tone of the Mother Panic costume drives this home too, and Zack Snyder wishes he could make vigilante armor look this cool.

If anything, Mother Panic #1 is a comic with attitude as it opens with Violet, the main character and the civilian identity of Mother Panic flipping off paparazzi and thinking about why no one has burned Gotham down to the ground. (Honestly, why does anyone live there other than the fact that rent is probably pretty damn low thanks to the fear of a psychotic clown poisoning the water supply at a time. Houser writes Violet’s caption boxes with a straightforward honestly that correlates with Mother Panic’s brutal fighting style. She’s a little bit of an asshole, and the whole arrangement of bringing criminals to her probably insane mother is scary just as much as it’s trippy, but adds to the intrigue surrounding her and the past mystery of her father’s death.

In Mother Panic #1, Jody Houser and Tommy Lee Edwards give readers a view of Gotham that isn’t connected to the Batman Family, their rogues gallery, or the GCPD, which are the usual vantage points on this frightening city. They offer up the POV of a young woman, who has had a hard life and is now some kind of edgy socialite by day and a vigilante by night, and repudiates Batman’s way of doing things. There are lots of gaps in her backstory and her relationship to the antagonist, Hemsley, but Houser and Edwards offer a tasty brew of dark, psychedelic, and occasionally snarky costumed heroics that makes Mother Panic much more decadent and depraved than DC’s traditional superhero offerings. It will be a lot of fun to see them connect the dots in the months to come.