Comic Review: Kill or Be Killed #1 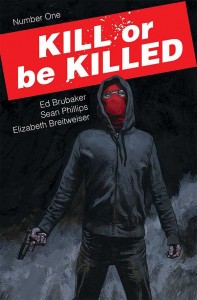 In Kill or Be Killed #1, the comic book auteurs Ed Brubaker, Sean Phillips, and Elizabeth Breitweiser set to put their mark on the vigilante genre. It’s definitely not a superhero book even though it’s main character Dylan covers his face with a red bandanna with eye slits when he’s killing criminals. Kill or Be Killed is like Death Wish for 2016 with a supernatural touch. And it’s more like Brian Garfield’s original novel, than the 1974 film, which can’t wait to get to Charles Bronson shooting homeless people as it focuses on Dylan’s life before becoming a merciless vigilante as well as the justifications for his violent actions. Dylan is a lonely, angry, young man, who has attempted suicide twice and feels like he has lost at life.

Through his panel layouts and use of  space, artist Sean Phillips drives Dylan’s loneliness and isolation home in powerful and sad way. For example, in one scene where his roommate Mason and his best friend turned Mason’s girlfriend Kira are hosting a movie night, he sits on the far end of the couch away from them with his body boxed in by white gutters. A couple pages later, he is stuck in the foggy grey background as Mason and Kira’s sweet nothings take up most of the panel. It’s like he’s a piece of furniture, not a human even though Kira makes out with by the end of the page. Dylan’s feelings of insignificance drive him to suicide, and after that fails, they drive him to violence even though his narration makes it seem like he is some righteous wannabe Punisher type, who wants to clean 2016 United States of its terrible people and “psychopathic politician”. 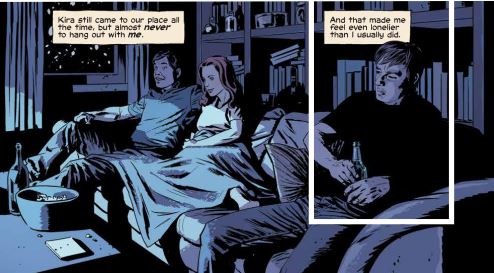 The demon that speaks to Dylan after he jumps off the roof could be an actual supernatural force, but the being is also a metaphor for the negative effects of toxic masculinity in society. Though depicted as a black, bilious blob by Phillips and Breitweiser, the demon is the spectre of rugged individualism and machismo that has haunted American society from Christopher Columbus to Chris Kyle. He espouses a simple philosophy of if someone beats you up, beat them that much harder that connects to the name of the comic, Kill or Be Killed. It takes a physical illness and taking a lot of punches to come around to the demon’s thinking, but he is shooting bad guys by the beginning of the comic. This is because Kill or Be Killed #1 is a non-linear story, but one of the good ones, like The Godfather Part II or Pulp Fiction, not Batman v Superman or a generic superhero comic that thinks starting in the middle of the story and doing a flashback after one splash page is super clever. 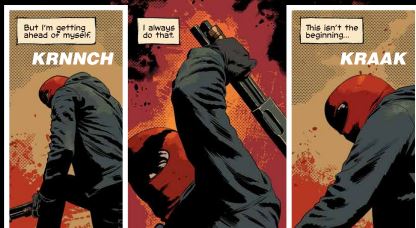 Elizabeth Breitweiser’s colors are integral to capturing the complexity of Dylan’s emotions and action in Kill or Be Killed #1. Yes, Phillips’ thick pencil strokes succeed at showing his melancholy or insecurity as he lets two men on the bus get away with cat calling at his ex-girlfriend, but Breitweiser burrows deeper into the feelings behind his actions. And she puts on a quite a show in the gritty first scene of the comic with wild reds and burnt orange playing off against the sepia tones of the building where Dylan is killing people. But, for the most part, Breitweiser indulges in the moody greys and brown as she and Phillips, like a skilled team of cinematographers, using lighting

Kill or Be Killed #1 is yet another comic book masterpiece from the team of Ed Brubaker, Sean Phillips, and Elizabeth Breitweiser. It succeeds as both a re-framing of the vigilante genre for the 2010s as an examination of how toxic masculinity poisons contemporary American society, a no holds barred character study, and an example of how changing the layout of a page can drastically change how we view a character.