Justice League is one of the main DC titles, so it was interesting that they held back the first issue until July, around a month after many other core titles launched. Justice L 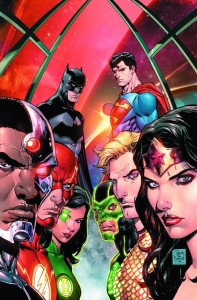 eague is obviously different in that it’s a team book, usually with the trinity of Batman, Superman and Wonder Woman, in addition to a rotating team. Throughout the New 52, the Justice League started t o expand a bit, but mostly stuck to the core of the trinity, the Flash, Cyborg, Aquaman, and occasionally the Green Lantern Hal Jordan (when he wasn’t being a space police officer). In Rebirth, the team gets shaken up a bit. Instead of Hal Jordan, the team gets the dynamic duo of newbie Green Lanterns Jessica Cruz and Simon Baz. Their integration into the team is one of the interesting aspects to Justice League. The major other aspect is Superman. Although Superman has been a part of the Justice League for a very long time, in the new 52 universe, their Superman recently died. An older Superman with a family, seemingly from before the New 52 reboot, has been on Earth but staying away from the other heroes out of respect as well as hope that they would be able to return to their earth. Along with Batman and the Flash’s investigation into Wally West’s return and the Watchmen button appearing in the Batcave, the mystery surrounding the two Supermen is one of the most intriguing facets of Rebirth in general.

This first issue of Justice League reminded me of the pilot of the animated Justice League show. In that show, the team gathers together for the first time to battle War of the World’s-esque creatures before entering the “mother ship” and defeating the aliens. This issue played out similarly, with the Justice League (already founded and familiar with each other) taking on a huge alien creature/ship that had released miniature spore-like objects, which attached themselves to the head’s of citizens and controlling them. The team faces trouble before the new recruits, the two new Green Lanterns and the Superman from another universe join the battle and reverse the tide. Besides the battle there are only two other major scenes. One is of Superman talking to his wife Lois Lane while watching the attack on TV, with Lois pushing Superman to go help out the heroes of their adopted world. The other is a flashback to the core Justice League in the orbital Watchtower mourning the death of their Superman and discussing what to do about this new one. Some are wary of including him on the team, but Batman wisely figures that it’s better to keep him close and learn more about him. The issue ends with the heroes defeating the alien creature, but it relays a message to the team through Aquaman, who now has some telepathic abilities. It warns them that it is a Reaper that has come to cleanse life on Earth and that more of its kind are on their way. Hmm, giant aliens named Reapers coming to cleanse life on Earth, where have I heard that before? Anyways, the Justice League tells the alien to go back and tell its friends that they protect the Earth and if they can’t save it, they’ll definitely Avenge it (wait that’s something else). Overall, I was a little disappointed in this issue, as it mostly consisted of the fight with the alien and didn’t allow for much character development. There was a funny line about the new Green Lanterns, and it’ll be interesting to see the dynamic of them integrating into the team. But more than anything, I’m really curious how Superman interacts with Batman, Wonder Woman and the others. In his own issues, there’s been a mysterious character named Mr. Oz who has hinted that both the old and new Superman are not what they seem. I’m curious if this mystery, or the one surrounding Wally West’s return will be covered in the Justice League book, or if they’ll be kept separate. I’m definitely going to stick with it, as Justice League is always one of my favorites, and I think it’ll start to pick up in the next few issues. Verdict: 3 (out of 7) – Justice League Rebirth is slightly scattershot  but sets up some cool possibilities for future issues.