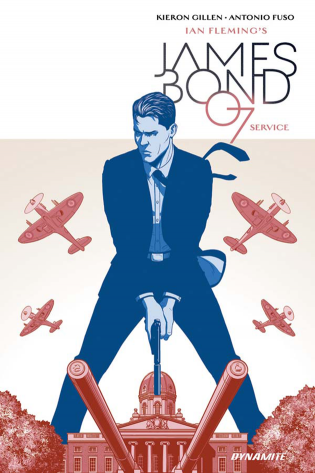 Kieron Gillen, Antonio Fuso, and Chris O’Halloran craft an enjoyable James Bond experience that melds the quips of Roger Moore, the lean and brutal action of Daniel Craig, and a little real world politics as Bond is on a mission to take out a British nationalist, who isn’t a fan of the new, isolationist American secretary of state. In short, Gillen’s take on Bond is sassy, a stone cold killer, and stars in a self-contained story. Much of James Bond Service Special #1 are silent action sequences, and Fuso and O’Halloran bring some real panache to them like having the panels wobble and blur when Bond is knocked, or erupting the page in orange and yellow when his enemy chucks a grenade into an armored car.

James Bond Service Special has fist fights, gun battles, and bone dry one-liners, but Kieron Gillen also manages to comment on the state of the US/UK “special relationship” along with Brexit (Without naming it.) and throw in some references to World War II, like Enigma and the Imperial War Museum. It’s ironic that Marshall, the chief antagonist of the comic, fancies himself to be a defender of the U.K. when he is more ideologically aligned with the fascists that Great Britain and the Allies faced in World War II.

In recent years, the writers and producers behind the James Bond films have said that things like Brexit and the election of Donald Trump have made it difficult to write a new installment in the series. Well, Gillen and Fuso don’t seem to have that problem and use the rise of nationalism in the U.K. as well as the Trump regime’s overall dickish behavior to its NATO allies to fuel the plot of this one-shot and add depth to its balls to the walls action. Gillen pokes at the tender underbelly of Trump’s approach to foreign policy that includes belittling allies through the slightly more competent Secretary of State while simultaneously taking shots at the Britain First/Nigel Farage type folks. James Bond and M deal with the Secretary’s insults to the U.K. and their spy apparatus with well-honed sarcasm and tremendous competence while Marshall kidnaps and tortures people. Sure, Bond is violent, but he isn’t crippled by racism and insecurity like Marshall and his Neo Nazi bros. He also has a more self-awareness for the past and shows an appreciation for old guns and gadgets, but doesn’t want to be a part of nationalist terrorism. 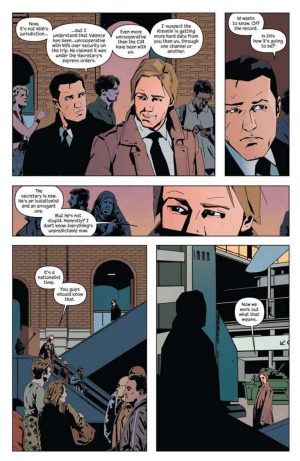 blunt object approach on the James Bond comic with Warren Ellis. The fight scenes are more brutal and more elegant, but there are also oodles of fun gadgets even though Q sadly doesn’t make an appearance. Fuso does the comic book equivalent of a long take in film using several panels to show exactly how Bond sneaks up to Marshall and defeats him without using a gun thanks to the current no-gun policy for domestic U.K. spies that was introduced in Ellis’ James Bond. But he isn’t afraid to get chaotic in parts like when Marshall gets the jump on him, and extreme close-ups and intense colors from O’Halloran paired with pure white show Bond getting his ass kicked. Fuso’s layouts are entertaining varied, and he’s not bad at body language either. He draws attention to a crinkle in Bond’s brow when he banters with Moneypenny when she wants to get straight to business or says something to draw the ire of M like the ending of the comic.

Kieron Gillen, Antonio Fuso, and Chris O’Halloran explore real world problems, like the rise of white nationalism and the United States’ uncouth behavior towards its European allies, in James Bond Service Special, but there’s time for fun too. From Jamie McKelvie’s very phallic cover, the comic has a lot of cheeky fun through quips, Bond’s interaction with his allies, and his gentlemanly behavior under fire. The fight scenes are brutal, but there’s always time for a one-liner after bludgeoning and explosions, which is what makes James Bond great compared to his monosyllabic, semi-amnesiac American counterpart…