Simon Baz and Jessica Cruz are forced to team up to protect the Earth!

Geoff Johns returns to the title he made famous and teams up with regular series writer Sam Humphries to establish the new status quo of the Earthbound Lanterns. The writing is smooth and it’s often hard to tell where Johns ends and Humphries begins, which bodes well for Humphries’ future on the title. There was a nice balance of action, characterization, and humor in this issue. In the grand scheme of things, Baz and Cruz are essentially blank slates, which again should work to Humphries’ advantage going forward. 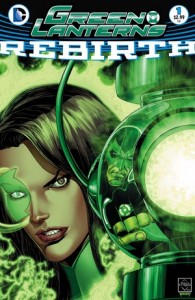 The art in the Rebirth issue was a bit hit or miss, but the Ed Benes pages were solid and and easy to follow. The Ethan van Sciver pages felt rushed and sloppy, particularly the final page of the issue, which was an absolute mess of composition. Interestingly enough, neither Benes or van Sciver are regular artists on the book going forward, so if you enjoyed the story but were turned off by the art, checking out the next issue would not be a bad idea.

The premise of the title isn’t anything that hasn’t been done before, with Baz and Cruz being forced to work together (and even share a power battery) in an Odd Couple/Lethal Weapon mashup. The same basic plot structure was also the basis for the first year of the New 52 Green Lantern title that Johns wrote, with Hal Jordan being dependent on Sinestro as to when he could and could not use his ring. The first couple pages feature an unknown narrator recounting the history of the various Earth Lanterns before showing a glimpse of a mysterious Guardian of the Universe with an all new power ring. We then jump between Baz and Cruz before they are pulled together in what ends up being a training mission set up by Hal as a way judge their abilities before he heads off planet to deal with Sinestro. In the end it’s revealed that narrator from the beginning is none other than Atrocitus, as he’s shown with fellow Red Lanterns Bleez and Dex-Starr as they prepare to invade the Earth and kick off the Red Dawn storyline.

Verdict: 5 (out of 7) – The Green Lantern titles desperately needed a refresh, and at least on the writing end Johns and Humphries deliver. Uneven art holds the title back, but there is room for improvement when the series regular artists join the book with the proper first issue.