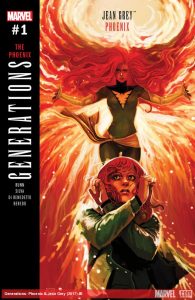 In Generations Phoenix and Jean Grey #1, which will somehow tie into the upcoming Marvel Legacy “event”, writer Cullen Bunn, artists R.B. Silva and Adriano di Benedetto, and colorist Rain Beredo have the young Jean Grey currently appearing in X-Men Blue go on a kind of adventure with her older self, Phoenix. She meets a version of Jean Grey, who has Phoenix abilities, but hasn’t gone full Dark Phoenix yet and was one of the X-Men in Chris Claremont and John Byrne’s classic run on Uncanny X-Men. It’s a transitional time for both Jeans, and the resulting story is mostly a heart to heart conversation with a side dish of a battle against back-to-planet-devouring Galactus and his herald Terrax.

I could go either way with the art work in Generations Phoenix and will probably have day dreams about cover artist Stephanie Hans doing full interiors on it, which would make sense for a $4.99 prestige one-shot. Silva and di Benedetto draw the hell out of a battle between cosmic forces and are especially helped by an energetic color palette from Beredo, who nails the requisite reds and oranges for the Phoenix and pink for Jean Grey’s special, telepathic draining ability that she picked up during Brian Michael Bendis’ All-New X-Men. There are all kind of bubbles, Kirby crackles, and little transparent brain babies running around during this scene, and Silva does a good job with scale placing Phoenix between Galactus and li’l Terrax in size. She is pretty freaking majestic. However, his layouts, figures, and faces are pretty generic even if he does have an eye for fashion in Jean and Phoenix’s club wear. 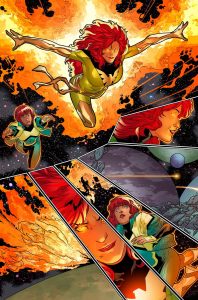 Epic battles that I can’t seem to shut up about aside, Generations Phoenix is a character study as Jean Grey tries to find out how to cope with the Phoenix force that she has had nightmares about in her current, excellent solo series , but she keeps getting deflected and transported to random places with her clothing molecules sometimes changing. Throughout the issue, Jean realizes that Phoenix doesn’t yet know that she will go evil, or that she is being manipulated by Mastermind. She must struggle with telling Phoenix about this side of her personality complete with the requisite Uatu the Watcher cameo. (He’s alive and has both his eyes!) This is a really cool way to set up a story, but Bunn and Silva’s ending is a cop out. However, his narrative captions showcase young Jean Grey’s fear and empathy as she tries to make a connection with her older self. Throughout the story, Jean starts to freak out when she realizes the pure scope of the Phoenix’s force because it’s basically pure, unadulterated life.

Generations Phoenix and Jean Grey #1 is a fairly enjoyable comic because Cullen Bunn, R.B Silva, and Adriano di Benedetto pull back the curtain and show the women behind the cosmic, destructive force and stage a cool space battle to boot. The ending is kind of anti-climactic although I like its middle  finger to messing with the timeline.

Overall Rating: 5 (out of 7)- Jean Grey/The Phoenix Generations has a hell of a cosmic fire fight and good characterization of our favorite telepathic red head, but fizzles out at the end.