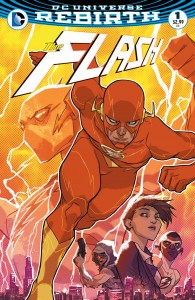 In The Flash #1, Barry Allen struggles with balancing his case load as a forensic scientist for the Central City PD along with being a superhero and friend. There is also the huge mystery of DC Rebirth, and the timeline being altered by Dr. Manhattan from Watchmen, but this takes a backseat to Barry’s crime fighting and civilian life. The comic  packs a bit of a visual punch as colorist Ivan Plascencia uses different color schemes to show The Flash picking which crime scene he wants to help out first. There is also a hail of red and yellow every time the Fastest Man Alive picks up speed. Artist Carmine Di Giandomenico knows when to freeze frame and uses a clever double panel setup to show The Flash’s thinking process as he picks  Unfortunately, his Jim Lee meets really thin inking  isn’t super expressive, and most emotional moments fall flat.

But this isn’t mostly Di Giandomenico’s fault. Newly DC-exclusive writer Joshua Williamson relies too heavily on The Flash’s narration to propel the story instead of action or character interactions. For example, Barry talks to himself about how happy he is that the original Kid Flash, Wally West, is back, but there isn’t any panels of them hugging or interacting just red narrative boxes. Also, Williamson continues to flog the dead horse by mentioning Barry’s chronic lateness on almost every other page like he doesn’t have any other character traits. He does have a bit of fun with the New 52’s Wally West, who is a science genius and a bit of a smart mouth even if he and his aunt Iris don’t play an active role in the plot and are basically there just to scold Barry for spreading himself out too thin. The downfall of this Speed Force-infused multitasking seems to be the point that Williamson and Di Giandomenico are trying to get across, and Di Giandomenico kind of nails it by having The Flash quickly flit from panel to panel not lingering on one image too quickly. It’s like you create the Speed Force in your head.

The Flash #1 also has something that “new #1” like to throw in because no one reading this comic has seen The Flash TV show on the CW: a retelling of Barry Allen’s accident that made him The Flash. Di Giandomenico’s forceful use of lightning and Plascencia’s chaotic yellows make the origin a memorable image, but then Williamson retcons it to show that Barry was working on a case with a fellow police officer named August Heart, whose brother was mysteriously murdered. (That’s his actual name.) And by the end of the issue, August gets superpowers because his name already sounds like the protagonist of a long lost 80s cartoon show that came on after Voltron. And of course, this is connected to Black Hole, the villain of the first issue, whose name describes his lack of personality. Building a supporting cast in a solo book is difficult work, but Williamson really takes the easy way out by connecting the new character to The Flash’s origin and almost instantly giving him superpowers without any buildup just as a final page cliffhanger. If the ship isn’t righted in upcoming issues, he

The Flash #1 has some nice flare in Ivan Plascencia’s color choices, and some of the layouts used by Carmine Di Giandomenico bring The Flash’s agile body and mind to life. But Williamson’s story (sans the action sequences) is weighed down by overwrought narration, a boring villain, and a focus on one of Barry Allen’s character traits at the expense of the others. Fans of the character are better off watching the CW show, and there’s no real connection to the bigger DC Rebirth mystery storyline so it’s not even worth picking up for that.