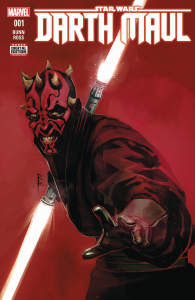 Even though many people think that Phantom Menace is the worst Star Wars film, the unbelievable radness of its villain, Darth Maul, is undeniable. Hell, he is so awesome that they brought his waistless self back in the Clone Wars cartoon. In Darth Maul #1, writer Cullen Bunn, artist Luke Ross, and colorist Nolan Woodard demonstrate what makes our favorite double bladed lightsaber wielding Zabrak great while also poking at his flaws, including his impatience and a thirst for vengeance. He wants to kill Jedi in any shape or form and won’t let his master, Darth Sidious’ wishes or timetable get in his way. Sidious sends him on missions to kill alien beasts or protect Trade Federation ships, but they are definitely not enough to slake his appetite for destruction.

Darth Maul #1 is the comic book equivalent of Peter Serafinowicz’s voiceover (Link to actual trailer) from the first Phantom Menace trailer aka the most epic thing my six year old self had ever witnessed. The opening sequence is a pitch perfect homage to Predator with a group of galactic game hunters huddling in fear as some green substance drip drops on the side of the panels. Ross uses inset panels to show their reactions to the Rathtar (The tentacle thing from The Force Awakens.) and then their astonishment as Darth Maul’s savage bravery as he kicks in a double page spread. The insets comes back later in the issue to show the events of the plot from a different 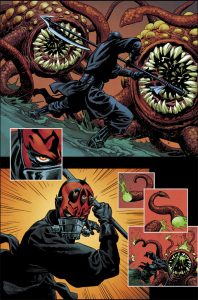 perspective like Darth Maul stalking a pair of Jedi in Coruscant and generally pissing off Darth Sidious. It is a little contradictory that a member of an order based on anger and hate can’t unleash it, but Darth Maul isn’t about the long game.

Or is he? In the vein of Kieron Gillen and Salvador Larroca’s Darth Vader series, it seems like Darth Maul will be about another Sith Apprentice scheming on his own away from the annoyance that is Sidious/Palpatine. Darth Maul #1 is an action packed prologue that establishes his frustration with not being able to do his Dark Side thing openly while setting up an alternate path for him to kill some Jedi. It’s basically his safe word as he stops from martial arts, flip, and kick inflected carnage to spare an alien pirate who mutters something about Jedi. (He thinks Darth Maul is one in the issue’s one moment of comedy.) A few more acts of violence, and he is suddenly free from his master to kill and hunt his favorite Light Side using prey just like the Rathtar that Bunn heavy handedly draws a parallel to in the first pages.

Darth Maul #1 is filled with kick-ass moments featuring Darth Maul, and Luke Ross’ explosive art and Nolan Woodard’s overpowering reds are a big key to that. A page where his Sith Infiltrator (I wanted that Lego so much as a kid.) suddenly drops out of hyperspace and destroys a pirate fleet is one of the many highlights. Cullen Bunn also gets Darth Maul’s laconic voice and narrow base of interests that include killing and violence and makes it seem like the earlier mentioned Mr. Serafinowicz is delivering every line.

At last we have revenge for Phantom Menace’s focus on a whiny 9 year old and a Jamaican stereotype/CGI abomination in the form of Darth Maul #1, which focuses one of the few cool parts of that movie. And as a cherry on top of a red and black Zabrak sundae, there’s an adorable Pixar short film meets the art style of Peanuts backup story from Chris Eliopoulos and Jordie Bellaire that shows that even probe droids can have friends.