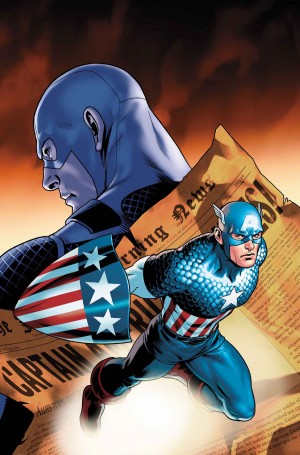 Surprising almost no one who has consumed a piece of superhero fiction in the past 5 to 50 years, Steve Rogers hasn’t actually been HYDRA his whole life ever since his mother Sarah went to a meeting of the predecessor to HYDRA in the height of the Great Depression. This never happened; it is all memories implanted by Kobik, the Cosmic Cube transformed into a child, who has been working for Red Skull and HYDRA all along. It is completely valid that Jewish fans of Captain America were offended by a character, who was created by two Jewish cartoonists Joe Simon and Jack Kirby, as a symbol of resistance against Nazism. But after reading Captain America: Steve Rogers #2, it is revealed that Captain America being part of HYDRA is just another villain brainwashes hero with MacGuffin storyline albeit with more provocative imagery that inspired a veritable cottage industry of Internet outrage everywhere from Tumblr to mainstream media and even random family members on Facebook, who haven’t picked up a comic since Jim Steranko was part of the Marvel bullpen.

Whereas Captain America: Steve Rogers #1 charged right ahead with an action packed fight against HYDRA operatives, writer Nick Spencer and artist Jesus Saiz spend basically all of issue 2 in flashbacks. The entire comic is Red Skull doing a villainous monologue and showing what he was orchestrating behind the scenes during the events of the recent Avengers: Standoff crossover and (Will Catholics be offended that he was disguised as a priest this whole event?) the Captain America: Sam Wilson series. Even though Captain America: Steve Rogers #2 doesn’t propel the series’ plot further at all, it acts as part reassurance for some fans (Read: The MCU fandom on Tumblr.) who were afraid that Captain America’s legacy, part the source of an eye roll for comics fans who are tired of gimmick based storylines, and might actually be a clever villainous plan as Steve Rogers regaining his youth and vigor comes with a very steep price as he is a pawn in Red Skull’s evil plot. In Ed Brubaker’s run on Captain America (That seems less fictional in a world where a racist, sexist, xenophobic man with an orange face is the presumptive Republican Party’s nominee for president.), the Red Skull tried to defeat Captain America through the political system, and now he hopes to win the greatest propaganda victory of all by using the highly unstable powers of Kobik to create a fake narrative where Steve Rogers has always been HYDRA. Even though, I still have this deep seated feeling that the current arc of Captain America Steve Rogers is sequential art as clickbait or yet another Marvel Comics mind control story (With issue as the comic book equivalent of “We did it for the lulz.”), there is a small seed of interesting ideas about the hollowness of heroic (or patriotic) iconography in this issue as Steve Rogers’ “triumph” in the Captain America: Sam Wilson tie-ins of Avengers Standoff was him playing into the Red Skull’s hands. 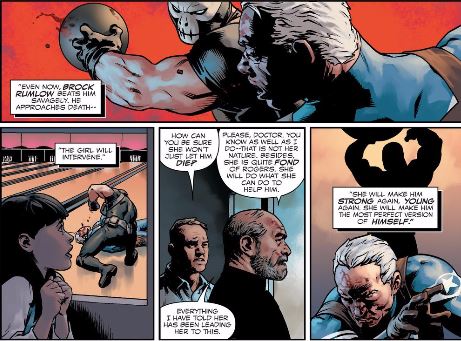 And even if the issue is one big retcon, it is a beautifully rendered retcon as Jesus Saiz joined a pantheon of great modern Captain America artists, like John Cassaday and Steve Epting, channeling the dynamism of the character in Captain America: Steve Rogers, but gives issue 2 creepy, nefarious feel as the Red Skull corrupts the “child” Kobik as well as Steve Rogers. The scenes in Avengers Standoff that were played for straightforward, punching filled heroism as the super soldier serum courses through Steve’s veins again and defeats Crossbones are marred by shadows and plenty of red as “Father Patrick” (Aka the Red Skull in disguise), not Steve Rogers, is the forefront of the scenes, which is fitting because Red Skull gets the majority of dialogue and captions in this issue. And Saiz’s work with Kobik is just downright creepy as he gives her completely normal child facial expressions even when she’s interacting with the Red Skull treating him like the cool uncle or something. This makes Captain America Steve Rogers #2 an uneasy issue to read as I kept trying to tell myself that she is just a MacGuffin, but Spencer’s dialogue and Saiz’s art makes her sound and seem like a little, impressionable kid.

So, Captain America: Steve Rogers #2 should probably be titled Captain Clickbait #2: Blame It on the Cosmic Cube , but Jesus Saiz’s almost horror tinged art and some interesting themes brought up by Nick Spencer about the amorality of SHIELD and the hollowness of heroes as symbols kept my interest enough for me to give issue 3 (which is solicited as more action packed and dealing with Steve Rogers’ actual role in HYDRA along with the trial of Maria Hill) a shot.