I had the pleasure of seeing Scott Snyder at Midtown Comics this past Friday and got a chance to read through Batman #30, so I figured why not review it this week?

Chances are, if you’re reading this review, you probably already know the deal about Batman in general. Â This particular issue is the set up the climax of the year long story titled Zero Year. Â The Riddler has the city hostage, and they need Batman to come out of hiding and help them take their city back. 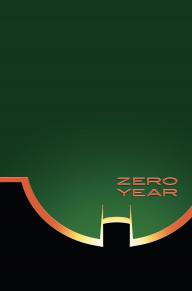 I’ve been a fan of Scott Snyder’s for the past few years now. Â I enjoy his American Vampire series in particular. Â Just looking over this one issue of Batman, it definitely does a good job of highlighting some of his high points as a writer. Â He does an excellent job of selling The Riddler as a real threat. Â Scott Snyder has a unique ability as a writer to portray anyone as a credible threat or having compassion. Â Too often I’ve seen writers in the past decide that they dislike a character and won’t write them seriously; making up excuses for why the character is weak. Â I have yet to see Scott Snyder fall into that trap.

Additionally, this issue in particular is very well paced. Â It basically represents my favorite moment in action stories; when things look to be at there worst, but then we get that beacon of hope we’ve been waiting for. Â None of this build up would have been possible without Greg Capullo’s excellent story telling abilities.

Greg Capullo has been one of the best in the business for quite some time. Â However, ever since he took on Batman from when the New 52 started, it made me wonder how he was not a regular Batman artist for years already. Â He approaches the subject matter and tone so artfully, it just makes it surprising for me to think about.

This might be the best showcase of his work yet. Â Some of the most gorgeous splash pages and intricate panel work I’ve seen him do. Â The level of detail and work put into some of the pages in this issue hearken back some of George Perez’s greatest works in the business. Â He must have busted his ass on this issue, and every Batman fan should be grateful for that.

Score: 7 (out of 7) If you were already reading Batman, you best keep going. Â If you dropped off Â the book for a bit, this is the time to come back.