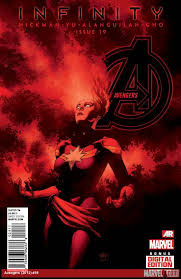 This is issue picks up both from last months Avengers and last week’s Infinity, focusing on half the team that has been captured and the other half that is working with the Galactic Council. While some could say that it’s slightly confusing, I do appreciate that Marvel has acknowledged that the Avengers and New Avengers books are not just tie-ins you could buy, but almost the chapters of the book that move the plot along but you can still gather from the main mini. I do like the attention this issue to the Builders and four of the characters who are relatively new to the Avengers but pretty connected to the Builders. I do wonder if we really need so many distinctions between the builders- certainly I get pointing our the Gardeners and Alephs (who look different) but how important is distinction between the rest of is it just Hickman being Hickman. With an already stuffed Cast page, it’s a reasonable question to ask and one which time will tell.

As for Yu’s art, it remains serviceable. His Builders are frighteningly great, but other scenes, such as Avengers in chains or helping out those hurt by the fight come off as scratchy and, at best, ok. 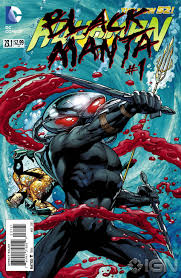 Johns, unsurprisingly, is one of best at really taking advantage of the mostly blank slate that is the New 52. Before, Manta was a baby killer. His murder of Arthur and Mera’s baby was, often, his most defining characteristic, besides such an odd, and often time cumbersome, looking armor. Here. Johns and Bedard have reduced/changed his origin to what he was before that murder: an underwater treasure hunter turned super-villain obsessed with Aquaman. But his obsession has reason: the death of his father by a teenage Aquaman that was caused by Manta inadvertently causing the death of Aquaman’s own father. So this isn’t a sociopath or psychopath – this is someone fueled by hatred that has become very good killing. Therefore, in the context of Forever Evil and Aquaman’s ‘death’ Johns and Bedard have changed his origin and motivation enough to allow him to focus on something new, to play the ‘hero’ against the Crime Syndicate and it seems a much more natural progression than it ever could have before the new 52.

St. Aubin does a good job, and I especially liked how he pulled off the scene between Manta and Ocean Master- two Aquaman villains that the New 52 have made more human, and thus more tragic in their villainy. 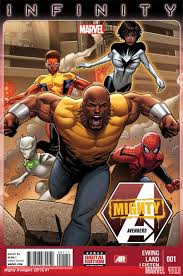 As a first issue, I found this issue very interesting. It seems very predicated on a lot of previous Marvel knowledge: you are almost expected to know Cage’s history with the Avengers as well as Power Man and White Tiger’s power sets and histories. It also asks you to ignore that Cage wouldn’t find it odd that Spider-Man is acting so weirdly after being on an Avengers team with him for some time. I do feel it sets up Monica’s new situation as Spectrum, Luke’s new Heroes for Hire eventual change in the Mighty Avengers, Superior Spider-man condescension, and our mystery (and hopefully funny to match his temporary costume) hero’s appearance and apparent history with Spectrum. So while it sets up some of what I assume will be ongoing dynamics and plots, I do feel that its possibly too embedded in Marvel history for some first time readers.

Which brings us to Land’s art. While I agree with many issues with his art, I will say that this was one of his better issues. Certainly, the photo realism still exists, I do feel that it was less prevalent and it had more actions and less of his usual awkward and sexualized poses for his female (though Spectrum did have a few poses that were closes). I do like Spectrum’s new costume and am glad we got away from the costume, overall glad to see her in a Marvel comic, as being one of Marvel’s best characters.