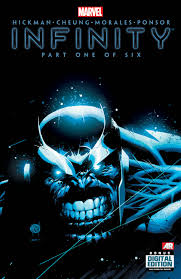 I’m sure I’m going to reviewing some if not most of Infinity as well as the Avengers and New Avengers books that based on the reading list from Marvel, are more than just tie-ins. Â So to start, I need to let you know my history with Hickman. I started reading his work with Secret Warriors which I really loved and since then I’ve truly enjoyedmost of his Marvel work – S.H.I.E.L.D. (which I’m still waiting for a finish to), Fantastic Four and FF. I was super excited to find out he was taking over my favorite Marvel franchise: the Avengers. And after 17 issues of Avengers and 8 issues of New Avengers, my enthusiasm for Infinity turned into being cautious optimism. Why? I feel New Avengers has been up to if not better than much of what Hickman has written for Marvel. His Avengers, has felt more about high-brow concepts and plot with none of the character moments and interactions which Hickman has done so well before. Â And the characters he has focused the most attention and time on have often been ones who, in my opinion, are boring and fans don’t have connection to. Hyperion, crazy Captain Universe, Ex Nihilo, Abyss, Nightmask and Starbrand are all very non-relatable characters. The only ones who are, Starbrand and Captain Universe, are often depicted as more and more inhuman due to their powers. So,coming into Infinity I was very nervous…

And frankly, most of my likes and concerns could be seen here. First let me say that a event book with a 1st issue this hefty in pages is impressive. I also appreciate that by the end of the 1st issue, events are unfolding and not the 4-5 issues of recap that Marvel has done with their event books in the past. Also, Cheung’s art is beautiful and I’m confident that Opena and Weaver will be great. Â And while I was slightly disappointed that they used the entire of the FCBD comic as part of the book, it is a beautiful book that certainly set the next 5 issues to be all about the action in space and Earth.

As the writing goes, it is epic in scope. However, in it’s epic-ness, we loose out in connecting with characters. What I’ve liked about previous events like Siege or Blackest Night, was a core of central characters whom we saw the event through. Here, there are some many characters, good and bad – from the group who make up the Builders Fleet or Thanos’ Black Order to the cast of the Avengers and New Avengers -it’s a lot. And while I enjoyed the intrigue of the Inhumans, the mystery behind why Thanos is interested in Earth, or in my mind, what the situation of the Builders are and how they connect or conflict with the Celestials are all interesting, but at times when reading it, I felt I needed footnotes. And while that is fun at times, to find out how things connect from earlier issues, Hickman walks a fine line of losing readers to the epic-ness without grounding it in characters who people know and love. And while I know some of the tie-ins will focus on the team going into space, the fact that characters like Carol, Jess, Tasha, Falcon, Sunspot or Cannonball aren’t the focus of the book is a potential problem. My hope is that the new Smasher shines in this miniseries and becomes a character fans can cling to. 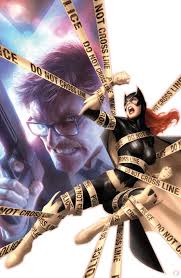 Man, I need a drink after this book. The fallout from ‘Death in the Family’ has really been probably the most felt in Batgirl. As part of the story, not only was Babs dealing with the Joker, but also her sociopathic brother, James Jr., who is a showdown with Batgirl threatened the life of the mother. Babs responded with a batarang to the eye and was unable to save her brother from an apparent death (psssstttt He didn’t die, he’s with the Suicide Squad). Anyways, Babs has been feeling unworthy of the Bat-symbol and her father, who mar or may not know about Babs being Batgirl, is hunting her for the ‘murder’ of his son. If that was depressing enough, we have Batgirl’s New 52 rogues gallery deciding it was time to kill of Commissioner Gordon. We also have Babs swinging into action sans costume to save her kinda boyfriend whom she saved as Batgirl after being maimed but went out on a date as Babs and beat up some gang lords. As it turns out a lot of things come together at the same time, as it’s wont to do in Gotham, and he kinda-boyfriend tries to save his brother from the gang lord that he and Babs beat up. Babs tries to save them but comes to late, as her kinda-boyfriend severely injures a cop who was an ally of Batgirl. His accidental but harsh attack on said cop results in a very trigger friendly GCPD, and in trying to protect Babs and his family from the gang lord, was shot down in Babs’ arm. Â So in the end, not only does Babs feel responsible for the ‘murder’ of her brother, hunted by her Dad, abandoned by her Mom, she now has the guilt of being unable to save her kinda-boyfriend from death by the police force her father commands. Now you know why I needed that drink…

Simone has done a great job on the book and we can see how it’s building with the coming conflict of Commissioner Gordon and Knightfall. We also get that she is really putting Babs through the ringer, a trial of fire, to really see if she is worthy of the Batgirl title. In some ways, this is a way of proving to Steph Brown and Cass Cain fans, why Babs is worthy of the title. Pasarin did a great job with the book, able to portray all the action and characters but also portray the emotions that are so raw in this issue. 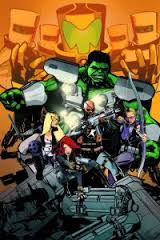 Art by: Guice with Epting & TheisÂ

I’ve been a big fan of this book since it’s relaunch within Marvel Now. While it’s name has betrayed it a bit, the story makes no qualms that this is a SHIELD book in which Avengers characters are being, literally, used. This is part of the mystery set up two issues ago about what happened on AIM island. We get a peak into what happened both during the mission, how the mind-wipe tech from issue 1 played a huge part, and the internal politics & war between Maria Hill and Daisy Johnson. (I will say I have appreciated that Spencer and his artists have made it a point to give them each a different look.) We also get a member of the team who has gotten little attention in Marvel Now set to undergo a very interesting journey in the next few issues.

I love what Spencer has done with this book – does it have the flair of using 3 of the 6 Avengers from the movie? Yes. However, he’s reduced them to bit players, while focusing on Avengers who aren’t in any other books or SHIELD agents and the organization, which to me, is far more interesting. We do get the first true ‘team’ mission but even that is unconventional from your usual super-hero team book.

While I enjoyed Ross’ art on this book, Guice brings a great look to such a espionage/political comic. His ‘gritty’ style is very different from Ross but appropriate and helps bring a certain uniqueness from the other Avengers books out there.