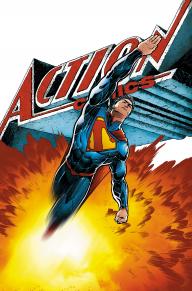 Action Comics #28 continues with Superman, Lana, and the warrior 7 miles below the Earth’s surface. He tells Superman to prepare for what’s on the other side because the seal he created is now broken. The “beast” on the other side is a bunch of small monkey like creatures. A short time later the Queen comes to thank them for breaking the seal and considers “LanaLang” the Queen of the above grounds and Superman her slave. They learn more about the glowing energy orbs and Lana wants to take one to create clean energy. Once in their city they realize this civilization uses the life energy of the small monkeys to power the orbs. Superman goes to stop and it forces them to escape, once they get to the Earth’s surface the monkeys change into deadly creatures.

Action Comics with Pak writing is how Superman comics should be. They show this godlike being have emotion and a human side. Pak has really turned this around and shows that Lana and Clark are really similar in their human nature. The art has been some of the best Superman art since the new 52 and really stands out in this issue seeing Superman doing what he does best by saving the day.

Overall, Greg Pak is a rest new start for Superman and Action Comics. The last few months with him as the writer have really turned this book around and let Superman shine as the true hero he is as well as the other characters, even if Lana is not the most interesting character. 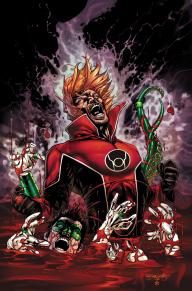 Green Lantern and Red Lantern are a double feature this month for a low price. the following is a review for both titles.

The first part focuses on the Green Lanterns, who are dealing with the aftermath of the shape shifters and other problems the corps is facing. Lok & Barreer are on their way back to Mogo when they encounter a new female Red Lantern who is feeling the effects of the red ring. They are able to stop her and continue toward Mogo. On Mogo Hal is swearing in the ex-convits and discussing his plans with John. Suddenly Lok & Barreer crash into Mogo with the new Red Lantern. After a lot of struggle they are able to contain her and determine she is from Krypton. Hal wants to save her and decides to talk to the still ringless Saint Walker. Saint Walker tells Hal that hope is lost currently and if it is to be found, leave it up to Saint Walker to find it. Hal gathers a transport team and sets off to get answers from Guy about why he is recruiting, when they arrive to the Red Lanterns planet Guy tells Hal that no Green Lantern’s are allowed in his sector of 2814, which is Earth’s Sector, since the Reds own it.

The second part focuses on the Red Lanterns, who at the beginning were still on Earth with Guy. They have to battle a villain and Guy learns that his love is not ready to commit to him at this time. They travel back to Ysmault and are alerted that Green Lanterns are there. Guy finds Hal and tells him that he agreed to give the Red Lanterns their own sector and it is 2814. Hal shows Guy the new Red Lantern they found. Guy also learns that before he arrived, Atrocitus had created 9 new rings, and it is determined that she must be one of the nine. After she is released, Guy has trouble putting her in the Blood Lake and asks Hal for assistance. During this time Guy tells Hal he made the right decision making Guy a Red Lantern because he fits well here. Finally, the woman emerges from the lake and it is revealed that she is related to Superman.

Having these issues together for a low price was very cool because it allowed the story to flow nicely without having to wait a couple of weeks to find out what happened next. Also there might be people who do not read Red Lantern and might pick it up now considering how interconnected this story is. The story had a lot going on but it was nice to see Guy and Hal finally be civil and have a good conversation together. The art in the Green Lantern story did not feel right, Hal looked off a lot of times. The art in the Red Lantern piece was way better and really captured the Red Lanterns and Green Lanterns perfectly.

Overall, this is a steal with two comics in one. the reader is given a great story that has some consequences with the future of Earth. Anyone who has not been reading Red Lanterns might want to start picking it up after seeing what it is capable of in this double issue. 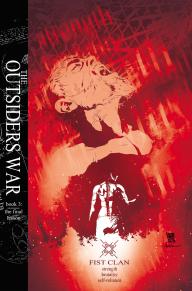 Green Arrow #28 continues The Outsider’s War storyline, and Oliver finally talks to his father who has been alive all along. Oliver’s father tells him how its their family’s right to control The Outsider’s and that he brought Oliver to the island to train him. Oliver does not trust his father and tells him that he is just a crazy man to him now. Meanwhile, The Outsider’s have gathered and their leader tells them to prepare for war against Green Arrow. Komodo questions the leaders goals and agenda, when Onyx is ordered to kill Komodo for talking back. Onyx does not obey and with the help of Komodo kills the leader and Komodo takes control of the 7 clans of The Outsiders.

What Jeff Lemire has done so far with Green Arrow is really reshape the universe and the character for the good. The Outsider’s War has continued to impress issue after issue, with each one building more upon this world.Â Sorrentino’s art is some of the best at DC right now. The panel layout are very unique and make each issue exciting to read and even to just admire the art on the page.

Overall, Green Arrow #28 keeps up the intensity that Lemire has bought to the book. With a story that keeps the reader wanting more and art that is dark and exciting, Green Lantern is a must read comic every month.