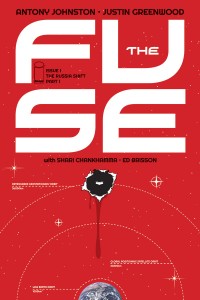 The Fuse #1 is an interesting concept about a large spacecraft above the Earth that is home to tons of people. The issue centers around a detective that wanted to leave earth and go up the the fuse to take a new job as a homicide detective. When he arrives he sees a person running out of nowhere and has a gunshot wound in the chest and dies in front of him. It is here that he meets is partner and tough, older, woman who knows how things operate on the spacecraft. We learn that people only volunteer to come up there if they are escaping something back down on earth.

This was an interesting first issue considering how we know nothing about this spacecraft and the people on board. The detective aspect will be interesting considering that guns are not accepted on the craft because it is pressurized. These aspects are going to play into some of the mystery of these characters.

Overall, The Fuse #1 was a slower moving issue that didn’t have art that really grabbed your attention but the story left some mysteries that did just enough to keep you interested. This could be something that really picks things up in the next issue and can build an interesting universe especially with the new cop/old cop dynamic. 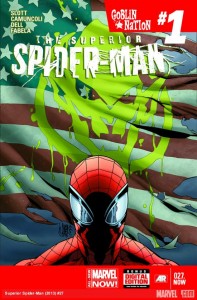 Superior Spider-Man #27 finally brings us the Goblin War. This issue took place 31 days after the previous issue and things in New York are not going well. Superior Spider-Man realizes that his spider bots have been hacked and decides to meet Osborn in his hideout. Down here Osborn reveals that he knows that Ock is really Spider-Man. When Osborn goes to attack Spider-Man it is revealed that he sent a hologram down to the hideout and has been on Spider Island.

The Goblin War is upon us and this issue has the story and the art to live up to the expectations. While this story has been slow moving, it was exciting to see “Spider-Man” come face to face with Goblin. Again the Peter Mind Scape had some touching moments, and a fantastic page when Peter tired to enter Ock’s memories.

Overall, Superior Spider-Man #27 finally had Superior Spider-Man and Osborn “meet”. This has been something that has been happening in the background for a long time and to see it come to light was very rewarding. Hopefully, the war will continue in the next issue and the action can really begin. 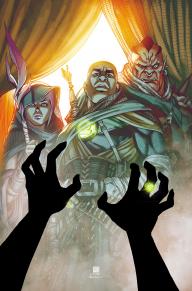 Green Lantern Corps #28 really takes time this month to dig into the other members of the Green Lantern Corps. We have John and his team, which includes many ex convicts from Oa, on a mission to find the shape shifting Lantern. This lantern could prove a turing point in the war against the Durlan shape shifters. Meanwhile, Salaak and Soranik are talking in the Oa remains when they are attacked and Soranik is taken hostage. The final page of who took her was an excellent surprise.

Putting more lanterns in the stoplight this issue really helped make for a classic Green Lantern Corps read. The story flowed nicely between the different events that were occurring, and it was nice to see some lanterns actually on Mogo enjoying themselves. The art had a dark, gritty feel to it when John was searching for the shape shifter which is different for a Green Lantern book. The way the action can flow between panels makes this issue the best visual issues post Geoff Johns.

Overall, Green Lantern Corps #28 took a step back from the focus on John and it really helped open up the universe a bit more. Hopefully they can keep focusing on other members of the corps and develop some of the new lanterns as well. The art continues to get better each and every issue and really adds to how impressive the book can be. The pieces for the war keep moving in place and the emergence of another foe will make things way more interesting for the lanterns.