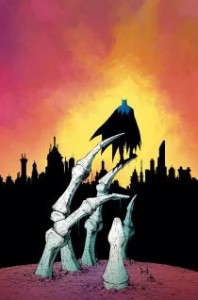 Batman #26 picks up right after Fox’s apparent attack on Bruce and the attack of Doctor Death. Bruce realizes that Fox wasn’t trying to hurt him and has to think of a way to save him without his Batman gear. They make their escape and Fox tells Bruce that it was an antidote to help Bruce incase he was poisoned by Doctor Death. Doctor Death finds them and grabs Bruce and begins to crush his skull until Jim Gordon comes in and scares Death away just as Bruce blacks out. There is a odd dream of Bruce in some prison before waking up in the hospital. Alfred tells Bruce he is lucky to be alive, but Bruce wants to leave. He notices he is locked to the bed and Gordon comes over and wants to talk about Doctor Death. Bruce doesn’t want to hear it and talks about how he doesn’t like Gordon. There is a great backstory just before Bruce breaks out of the bed and leaves the hospital. He gets his “Formal Wear” and goes to the weather center where the cops are waiting.

Zero Year has been such an exciting ride it would be great if it lasted a bit longer. There were so many great moments in this issue. Seeing Bruce trying to fight his way out of situations without his gear was nerve wrecking and the back story with Gordon is very interesting. The backstory with Gordon was perfect and allowed us to see the reason for Bruce’s mistrust but still understanding that Gordon is a good cop. The page when Bruce breaks the cuffs and gets out of the bed was fantastic.

Overall, Zero Year is a must read for any Batman fan. The art is stunning, the colors are great even if they are not dark like a normal Batman comic. There is just so much happening right night in Gotham, how will Batman walk away from this. The interactions with Gordon are great, mainly because we know where they end up. Batman #26 really does a fantastic job. 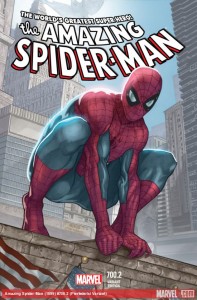 Amazing Spider-Man #700.2 continues with the snow storm crippling New York City and Aunt May stuck in a freezing house. Peter gets his Spider-Man gear and rushes out to save her because he senses that she is in a lot of trouble. He makes his way across the city having to stop a long to way to help people in a burning building, knowing that he is putting Aunt May at risk. He keeps thinking about how cold he is along the way and the cold effects his grip and how he has to go about saving people. He gets help from a snow plow guy and when he is about to give up he begins seeing things, villains, and then his Uncle Ben. Uncle Ben tells him he must save Aunt May and that Uncle Ben is always in Peter’s heart. Peter makes it just in time to save Aunt May and fix the house for her.

The issue had some great moments in it, with the art providing some good detail. The whole time with Peter commenting on how cold it is and that he knows if he saves more people it would mean Aunt May might not make it. There was a great page where Peter sees some of his greatest foes and they are all thawing snowballs at him. it was a great moment right before Uncle Ben showed up to give Peter the courage he needed to save his Aunt.

Overall, this is the end of the two part story that had a very heartfelt conclusion and featured Peter as Spider-man doing what needed to be done to save the people of New York before he saved his Aunt. Seeing Spider-man battle the elements was interesting and hearing Peter comment on the cold made it that much better. Overall, it was nice seeing Uncle Ben telling the real Peter Parker, “With Great Power, Comes Great Responsibility!” 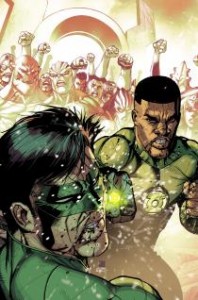 Green Lantern Corps #26 keeps most of the story close to “home” which is a nice change considering the corps have been doing a lot of fighting. John gets onto Mogo and tries to save the other Lanterns who were in the Citadel from crashing into Mogo, but Mogo can change the gravitational pull and saves the lanterns inside from crashing. After he sends several new recruits off to help avoid a war on a planet that uses battles till the death to determine political decisions. There is a shapeshifter that shifts into one of the lanterns and kills someone causing more mistrust of the Corps. John and Hal have a chat where John gets very upset with Hal about Kyle, Guy, and the state of the corps. the two talk as men and John agrees that he will help Hal out, with part of that being building new facilities on Mogo.

This was a great issue in the Green Lantern Universe. Finally a lot of the “smaller” issues were discussed that needed to be since the end of the Relic and even the first lantern. It was awesome seeing Mogo help John create the new lantern HQ. It was great having John bring up issues like training new corps members and worrying about where the lanterns would live. The art was fantastic in the issue, it really stood out and had a lot of detail, but then on the war world and John and Hal’s talk there was a darker tone to the art, which worked great.