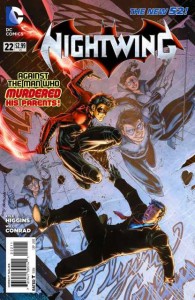 Nightwing continues his search for the man who murdered his parents. Having traced him to the Mayor’s office, he pays him a visit to warn him about hiding Tony Zucco. Meanwhile, Prankster has taken the city hostage in a stratagem designed to force the Mayor to pay for his crimes.Â Nightwing sorely underestimates Prankster and the city pays the price.

Dick’s hunt for Tony Zucco is starting to affect him mentally. He’s making mistakes; not thinking clearly. Instead of seeing the simple solutions, he’s over complicating his problems. As pointed out by his roommate, the best way to keep someone from hacking his “phone” (suit) was to turn it off. The bigger mistake was not handing Prankster over to the police himself. Dick underestimated his ability to escape from the rooftop before the police arrived. Now, he’s responsible for a train full of dead bodies. Deaths he could have prevented had he been thinking more clearly; had he not underestimated Prankster. He’ll have to put his hunt for Zucco on hold to deal with Prankster in the following issue.

Moving Nightwing to Chicago was the change this series needed. Kyle Higgins appears to be writing the series with renewed excitement. Setting Nightwing up against the Prankster for his first post-Gotham villain is turning into a thrilling story. Not only did he blow up a train full of people, but he is also holding the police hostage in their own briefing room. Readers may not be able to predict what he will do next. This is what good writers do. Will Conrad on art has done a great job though there isn’t always consistency with Dick’s appearance. At times, he looks like a completely different person. Thankfully, it’s not too distracting.

This was another enjoyable Nightwing story that is building into a bigger arc than Dick’s hunt for Tony Zucco. Given what occurred in this book, Zucco may actually turn himself in. Readers will want to check out next month’s issue to find out what happens. 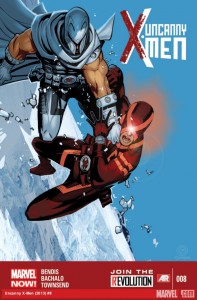 After their battle with Dormammu, the X-men settle back into their new home. Gold Balls Fabio is returned home and Magneto and Cyclops finally have a conversation about trust. Brian Michael Bendis delivers another decent issue that moves the story forward but suffers from mediocrity and inconsistent character development.

Mageneto’s betrayal of Cyclops to SHIELD is finally addressed in this issue. This was going to be a tricky sell to readers but Bendis pulled it off. His explanation for why Cyclops can still trust Magneto is entirely believable. SHIELD should be the ones doubting if they can trust him or not. They probably don’t by now. As for Illyana, it’s disappointing that she shows no signs of being affected by her battle with Dormammu. It’s almost as if nothing ever happened. Other than Goldballs Fabio, none of the characters seem affected by the ordeal. This is disappointing.

Between All-New X-Men and this series, it’s clear that the two series are moving toward the same destination. Whatever that event may be, it’s proving to be a disappointing ride for readers if Bendis is producing mediocre stories simply to move plot points forward. Readers may want to be cautious about continuing to purchase this series.