This is the first issue after the opening arc and I was pleasantly surprised. The first arc had very solid storytelling and artwork and this issue seemed to follow suit for the most part. The story seems a little silly for the first half of the issue where Logan goes with his new crew to get a tattoo. And without his healing factor it’ll actually stick this time around. The second half of the issue was much better, I feel like it laid some important groundwork for the next few issues. And with The Death of Wolverine on the horizon, I’m assuming this will wrap up rather quickly since the final issue is #12. 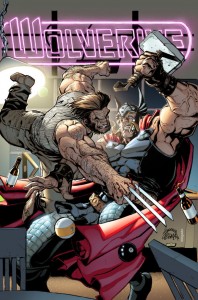 During this issue, I was glad that we get to see a confrontation with a hero other than Superior Spider-Man about Wolverine’s decision to “turn villain.” Logan has a plan and no one in the book really knows what it is so it is fun to see him in this undercover role and play both sides. There is clearly a deeper meaning to the exchange between Logan and Thor and it almost seems counterproductive because at the same time Logan is trying to prove his commitment to the team is the same moment in which Pinch first has doubts. How will these doubts affect the dynamics of the crew in the weeks to come?

I was disappointed to see that Ryan Stegman was not on interiors for this issue, but that blow was lessened by the fact that the art was done by Gerardo Sandoval. I’ve really been enjoying his stuff at Marvel lately and am glad to see him on a big book like Wolverine. His art reminds me a lot of Joe Madureira’s artistic style, which is always a plus.

And as a side note, I totally enjoyed the page that revealed Logan is a fan of Bruce Springsteen. Which if you are familiar with the song “Atlantic City,” it’s actually kind of fitting for the scene.

Review 5 (Out of 7) — Not the best issue of the series so far, but it is worth reading if you are enjoying Paul Cornell’s run with the character. And hey, it has a brief bar fight between Thor and Logan so what’s not to like?