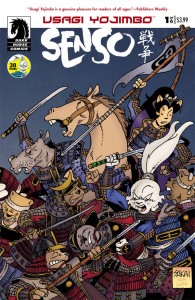 I have a confession to make. I’ve never read an Usagi Yojimbo book before. I consider this to be something of a sin, especially considering I was a child of the original Teenage Mutant Ninja Turtle period. I had always seen Usagi hanging around, had the urge to buy his books countless times, but for one reason or another (too many Transformers and X-Men books to buy instead) just never got around to it. I even met Stan Sakai and his wife at Comic Con, such a nice guy! Ok, I feel better now.

So, having made that admission, I can honestly say I came into this book about a classic character with fairly fresh eyes. And in this particular case, that probably wasn’t the best of circumstances for a reviewer. This issue takes place twenty years into Usagi’s future. He is now a general and battling the army of the evil Lord Hikiji. None of this made any sense to me but I pressed on, and for the most part I’m glad I did.

Senso is an introduction to the war that Usagi and his Lord Noriyuki have been battling against the dastardly Lord Hikiji for undetermined amount of time. This issue gives a glimpse into the battle tactics of ancient Japan and the politics behind the scenes as the generals deploy maneuvers against one another. The dialog is filled with genuine Japanese terms that I had to look up in order to really make sense of the relationships between the characters and their significance to each other. For the most part this issue is a bit of a textbook lesson of ancient war until Usagi’s son Jotaro is overwhelmed in battle and Ugasi looses his shit and attempts to rescue him from the fray. At this point the drama of the battle truly ramps up and ends in a very bizarre crescendo with a spaceship of all things crashing into the middle of the battlefield and sending the entire fray into chaos.

I’ll admit even after rereading this book and researching Usagi a bit I’m still kinda lost. The ending of the book totally threw me for a loop, I have no idea how to process this crazy turn of events without more knowledge of what the heck this means to the series. But all that means is I’m going to find a bunch of Usagi Yojimbo trades and catch myself up, because I like Sakai’s handling and care in his work. His artwork is delightfully cartoony yet informative and accurate to the period of time he’s portraying. It’s just a pleasure to look at from panel to panel.

If you’re a new reader to Usagi Yojimbo this is probably not the best issue for you to come aboard, unless you plan on doing some homework. If you’re already a fan I imagine this book was a lot of fun with the future of Usagi revealed and the totally nuts ending. Sakai’s art alone is worth the price of admission, this is truly the work of a legend in the medium.

Score: 5 (out of 7) I vaguely remember a Ninja Turtles/Usagi Yojimbo crossover thingy when I was a kid. I probably spent the $3 meant for that book on Slurpees and Garbage Pail Kids. Ah, the ignorance of youth.