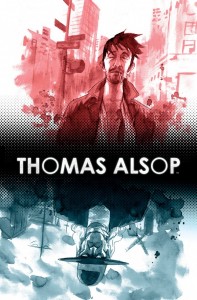 Let’s start with the title; Thomas Alsop.  I love this title.  It’s gutsy.  It’s just a guys name.  So many comic titles try to jump out at you by either being one word that stands out, a few words put together that sound epic together, or something along those lines.  When it’s a person’s name, it’s usually one we  all know too well (Batman, Wolverine, etc.).  Here though, we don’t know Thomas Alsop.  Those are the question posed at the beginning.  What is Thomas Alsop?  Who is Thomas Alsop?  I love it.

Now then, you may all be wondering the same things.  And I get that.  I probably don’t really know him either.  I mean, there are 7 more issues of this book on the way.  He’s really a guy we all kind of know.  You’ve seen this story since the dawn of stories.  Chosen person X protects chosen thing Y.  What makes this story stand out is how it’s constructed in this medium.

About half way through the comic, we go from Thomas Alsop to one of his ancestors from the 1700’s and follow that character for most of the rest of the issue.  I immediately thought this was brilliant.  Often in comics, we stick to the main protagonist and maybe we’d occasionally flash back to someone from the past.  This time, the past and the present are being told to us at about the same time.  This is not only an original take on these kind of stories, but creates new possibilities for the narrative that would not have been possible otherwise.  I think Chris Miskiewicz deserves praise for that.  This alone should propel this book towards the top of your reading list.

Palle Schmidt on the art really helps this story move along.  I’m a fan of minimalist coloring and I think it works extraordinarily well in this story.  The art itself has a nice blend of feeling somewhat minimalist, but also having a great deal of detail in the backgrounds.  I was unfamiliar with Palle prior to this book, but the art really shines through here and is quickly making me a fan.  I look forward to seeing where this story takes us.

Score: 7 (out of 7) Boom Studios has really been upping it’s game as of late.  I get the feeling that they’re working towards becoming another creative and innovative publisher in the way that Image has become over the last few years.  If that’s what Boom Studios is trying to do, then they are well on their way and Thomas Alsop #1 is a step in that direction.