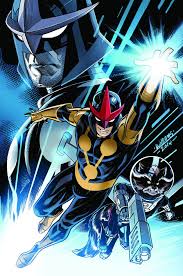 Sam and Rocket have been poisoned! Will they get the helmet back to Adomox in time to trade for the antidote to save their lives or will this be the end for our heroes? Beware; this issue might also feature a certain telepathic canine coming to the aid of our heroes. I really enjoyed this little arc simply for the team-up between Sam and Rocket. I know it seems Rocket is everywhere but I am okay with that because he is great! I love seeing Sam interact with the bigger Marvel Universe because it kind of helps connect such a newer character to the bigger picture. He is a legacy character in a sense but we do not know much about his father or his true legacy as a Nova.

Speaking of Sam’s father, he plays a decent role in the Original Sin tie in because the Watcher revealed to Sam before his untimely death that Sam’s father was in fact still alive. I like the way it is both teased and then touched upon in the issue. I am very much looking forward to the potential reuniting of Sam and his father Jesse. It may not be the easiest road but I think it will be worth all the bad things and bad guys Sam has to go through to get to him. He has to start somewhere, right? And hopefully he’s not late for school!

The artwork for the issue was solid and very appealing to look at, it’s not my favorite on the series but it is nowhere near bad. I feel like it fit the tone of a Rocket, Nova, Cosmo team up very well. And I like Duggan’s writing on this series; it seems like he gets what makes these characters tick and is going to continue taking them into interesting territory that will make for some good stories. It isn’t necessarily an Original Sin tie in you have to read but it is very enjoyable if you’ve been keeping up with the series.

Rating: 5 (Out of 7) – All-around solid issue from Duggan and Baldeon! Plus the truth about Sam’s Father!