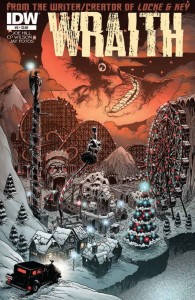 In comics, Joe Hill can do no wrong. I’m serious. Go pick up Locke & Key. Then give The Cape a shot after that. You might as well check out Thumbprint while you’re at it. I’ll wait, it’s no problem. When you’re done you come back here and start on Wraith. And then you can thank me when you’re finished. I accept cash and food donations.

Wraith is the prequel to Hill’s excellent novel NOS4A2, a story featuring the vile Charles Talent Manx and his diabolic 1938 Rolls Royce Wraith, which can drive between worlds and deliver Manx and his victims to the eternal playground of Christmasland. The children Manx brings to Christmasland never want for anything, never grow old, have all the candy canes they could ever want and endless amusement. They also become evil needle toothed vampires, but there’s always a trade-off.

As I read NOS4A2 I desperately wanted to know just how Manx came to find his 1938 Wraith, how he found his way to Christmasland, and just why he uses so damned many exclamation points when he speaks. As if to answer my prayers, we now have Wraith, which is bring us closer to the story of who Manx is and how Christmasland came to be. Told from multiple vantage points, the past two issues have followed a group of escaped convicts looking for a way to outrun police pursuit, and have called upon Manx to be their getaway. Unbeknownst to them, their escape with Manx will take them to the gates of Christmasland, a wintery fantasy world filled with the children Manx has “rescued” over the years. It’s a wonderland they will probably never return from.

Hill has this way of creating characters, fleshing them out in five minutes and making you feel like you’ve known them forever, regardless of whether you love them or hate them. In two issues I’m completely invested in this crew of convicts, no matter how despicable or relatable they may be. And Manx. He’s completely repulsive. He talks like he’s Mr. Rodger’s long lost brother. And I can’t get enough of him. Hill has created a villain with such appeal that you never want to see him go off camera. He’s a simpleton and truly a bad guy but he’s just so damn fun. Wilson’s art is proving to be a perfect fit for this book as well. I’m typically hesitant of novel adaptations since I’ve always got a preconceived notion of what every character looks like in my head. So far Wilson has nailed every image in Wraith. Manx looks exactly as I pictured him. Maybe even uglier and and more dopey than I imagined. Christmasland and the kid vampires are as creepy and chilling as I had hoped.

I can’t say that you could pick up Wraith without reading NOS4A2 and be completely in tune with the story. I especially feel that the first issue requires knowledge of the book for you to really appreciate it. The second and third issues have more of a standalone feel though, so perhaps by the time this series is done it will be more self-contained. Regardless, it’s an incredible ride in the Wraith so far. If you enjoy horror, pitch perfect characterizations and art fit to match, then this is your book. Pick it up, before or after you sample the rest of Hill’s work.

Score: 6 (out of 7) If you like characters that end every sentence with an exclamation point, then this is your book. 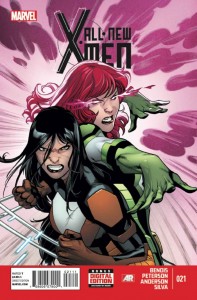 Back before Marvel NOW was a thing, I had my doubts about Bendis taking over the X-Men. I’d literally read year’s worth of his work between Avengers universe titles and event books. The X-Men have always been my favorite Marvel team, I’ve been reading Uncanny since I was 10. And I’m old, so that’s a really long time. So when I heard Bendis was taking over Uncanny X-Men and the new All-New title, I was a little afraid. His tendency to write every character either in the Captain America voice or the Spider-Man voice had become a big problem towards the end of his Avengers run. But, thankfully I’ve been more than pleased with his work on the X-Books thus far. I feel like Uncanny and All-New are telling different stories but work on the same level of excellence with each other. It’s been a good time to be an X-Fan. As to where this title is heading however, that’s anybody’s guess…

The current arc of All-New feels a bit like quick fill-in material before the next longer storyline begins. We pick back up with our time displaced original X-Men captured by Stryker and the Purifiers, along with Kitty and X-23. I love that they’ve brought Laura back into the fold. Her solo book was one of my favorite female X-titles and her character has always had such depth for me. She’s might be Wolverine’s clone, but she’s got a tortured heart, and has so much soul searching to do to heal her wounds. Being raised as an adolescent killing machine hasn’t helped. Admittedly, I never read Avengers Arena and have missed out on some of her story there. There’s a panel in this issue featuring her battle with Hazmat that explains the state the original X-Men found her in a few issues ago. Seeing as how this issue features the Purifiers, we get plenty quoting of scripture and blaspheming of mutants. I’ve always found the Purifiers kind of boring, religious zealotry is just not that interesting these days. To wrap up, AIM gets involved, our mutants find a way to escape their evil clutches and we end the issue with a damaged X-23 finding solace with our young Cyclops.

I like how Bendis is handling our team of young mutants and giving them all their own voice. Really only Iceman talks like Spider-Man and that’s quite an accomplishment. The next story arc is coming is titled “The Trail of Jean Grey” and based on solicitations I’ve seen it involves the Guardians of the Galaxy, so I’m assuming this Stryker story will end up having a greater impact later on in the series. Brandon Peterson’s art is a great compliment to Immonen’s usual work. I especially loved the first two pages of the book, which are drawn in a totally different style from the rest of the issue, looking like a throwback to the great issues of the 80’s. The colors are good overall, being a little dark and heavy on the greenish tones in some parts.

Whether you’re an old school X-fan or a new reader looking to see what these mutants are all about, All-New X-Men has done a great job servicing both groups of readers. While this current story arc hasn’t been my favorite thus far it still introduces enough quality elements to make things interesting.

Score: 5 (out of 7) Kitty Pryde totally talks in the Captain America voice.