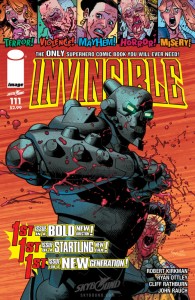 Issue #111 is suppose to be the start of a new direction for Invincible, chock full of violence and mayhem. This is the Walking Dead’s Robert Kirkman writing the book, as stated in the letters page. Which would be all well and good if that didn’t describe the book for the last I don’t know how many issues.

It’s been quite some time since the days of Invincible being a teen comedy superhero book. Sure there was ultraviolence way back in issue seven. But then it was a shocking contrast to the rest of the book’s tone. Extreme violence was used for extreme situations. These days the book is a gorefest plain and simple. Oh look, the issue starts with someone getting brutally murdered. I would have been more surprised if someone’s head didn’t pop like a grape for an entire arc. Dismemberment andÂ  disembowelment have become old hat. And this new arc promised more of that. Violence is means nothing. It’s no longer shocking. Probably why there was rape in the last issue (which wasn’t brought up at all in this issue in case you’re wondering).

This turn of events saddens me because Invincible was once my favorite comic. Once it had great characters and stories all the while parodying superhero tropes in clever ways. Now it has become a parody of its formal self. Maybe Kirkman has something clever up his sleeve to make some statement about violence in superhero comicbooks these days. Maybe… That is if Invincible didn’t lead the way in superhero violence. Because that is what this book is currently known for, and given the advertising for this “new direction”, what it wants to be known for as well.

There’s no false advertising on the cover’s top banner. Plenty of violence and misery to go around. Then again, it’s been that way for a while. But as a bold new direction? HA!

With that out of the way, the story was continues with what was set up a while ago. Robot is furthering his plan to take over the world, and Invincible tries to stop him. It all makes sense and was step up well. If you took out the two acts of ridiculous violence, it would have been a fairly standard read. I guess that’s why there’s so much these days. Easier than writing a compelling story.

Ottley’s art is as always top notch. The dismemberment splash page is beautiful and I found myself staring at it for quite some time. Sure there’s a ton of violence, but at least it’s drawn well.

Review Score: 4 (out of 7) Invincible continues to try to shock and awe. It sets up what could be some cool stuff for the next issue…but methinks it will probably just involve more folks getting killed off in a crazy manner. I hope I’m wrong.