I’ve always had a weird fascination with henchmen, goons, lackeys, toadies and the irks. I mean when you think about it, it’s really just one of the most thankless gigs in the world. You are generally used as cannon fodder or distraction and really serve no purpose beyond being beat up, shoot or killed. I’ve always wondered why anyone would take the job or how do you ever get involved in that field. 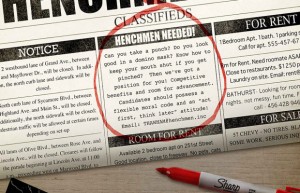 It seems like I wasn’t the only one obsessed with the notion. Enter Henchmen, Inc, a brand new comic from the creative team of Tim Simmons and Jim McMunn published by Monkey Brains. This book centers on Michael Finch, a boy who dreamt of being a superhero, grew up to be a crook. After being sent to prison for the second time, he comes out the other side trying to be a new man. His motivation is doubled when he finds his girlfriend is now pregnant with their kid. However, as noble as his ambitions are, the real world proves to be a monster to an ex-con. This forces him to partner up with an old friend, and we are introduced to Henchmen, Inc.

Unlike henchmen of past, this organization is well organized and ran like a proper temp agency. Employees are given benefits, and legal counsel. More importantly they are given training in dealing with supers. And one that explains the biggest problem I’ve always had with henchmen is them just not being efficient at their jobs. But now we understand that they are trained to do so to protect their own arses. As Finch is trained in how to essentially take a dive when it comes to engaging with the big boys and girls of the world. This of course comes into play during the issue’s big climatic fight.

And while the concept seems like a fun one-off, the creative team is smart enough to end on a cliffhanger that wets your appetite for more.

The art in the book is solid. With the real highlight being re-imaging popular/famous comic book characters while retaining the spirit of their design with outright copying it. Also a special shout-out to the design of the henchmen uniforms. I really can’t wait to see what else they cook up as I feel the elaborate costumes could become an amazing running joke.