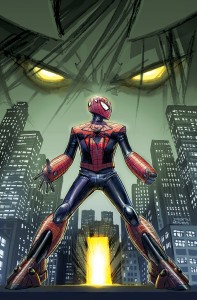 This might have been my favorite Edge of Spider-Verse tie-in yet because it is so different from the Spider-Man we know. The writing was great and I the art was awesome. I was hooked after the first few pages which tell the origin of Aaron Aikman, The Spider-Man. It was very engaging until the last page, I kind of didn’t want it to end. If this was a character Marvel wanted to revisit, I would definitely read it. This issue was an easy read, some parts were narration heavy, but it balances out with the scenes where it is more action oriented.

I love the way Aaron comes to be The Spider-Man. It’s a nice change of pace compared to the traditional power and responsibility deal with a variation of Peter losing a loved one. It was much more engaging not having any preconceived notions of this character and who he is supposed to be. He is not anything like the Peter Parker we know. It’s almost as if he is a mix between Curt Connors, by developing a treatment to alter his DNA using cloned spider genes and administering it to himself in secret, and Tony Stark, by designing really cool armor and gadgets. And his armor has a neat breakdown of what everything can do on page two. Tony Stark would be proud.

The artwork is very good throughout the issue. I really enjoy Dustin Weaver’s art to begin with but paired with this awesome costume design I was thrilled. The Spider suit is awesome and has a very Iron Man feel to it which is not a bad thing. Two villains in the issue have pretty cool designs and I enjoyed the Marvel Comics Super Villains bios, they were a nice touch. All in all, I was very satisfied with the way this book looked even with Weaver pulling double duties as writer and artist!

Rating: 6 (Out of 7) – This book is a very fun read with both great art and writing. Definitely a Spider-Man I’d like to see more of.